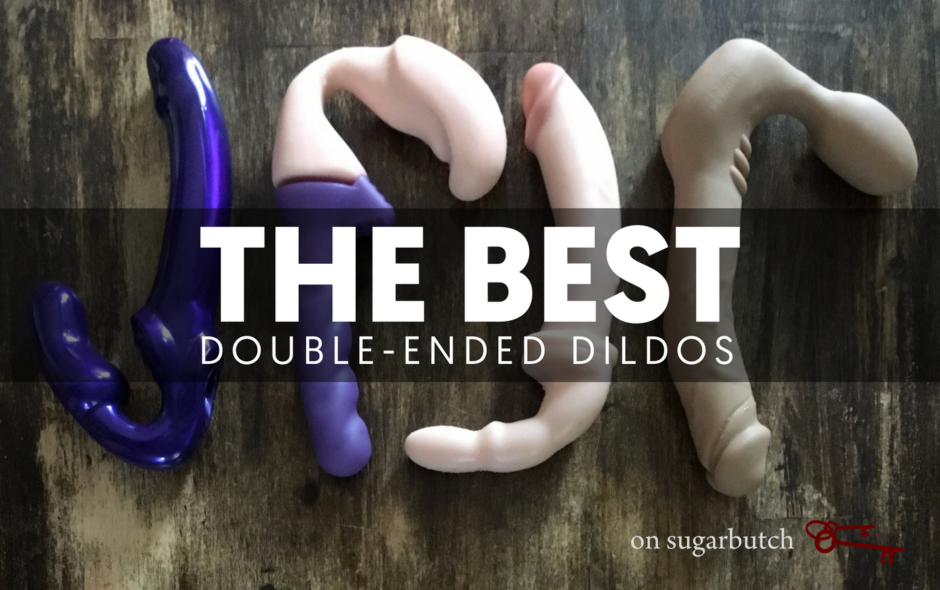 The trouble with advice about these things is that they’re all so subjective, ya know? So what works for me may not work for others. Still, here’s my best ideas, from my own experiences and from talking to a lot of other folks.

Yes! Absolutely. However, they do have a tendency to slip out, especially in certain positions (like if the wearer is on top with their legs apart, for example). Using a harness with a double makes it more secure while still giving the wearer extra sensation.

Which double-ended cock to choose 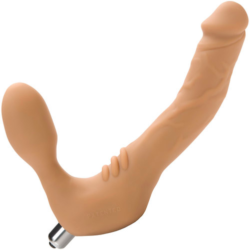 Personally I like the Feeldoe Realdoe the best of the double-headed ones. It has a variety of sizes and colors (though the colors correspond to the sizes, so you can’t just get whichever color you want in any size), and I particularly like the (white person) skin tone color because it’s relatively close to my own. (It only comes in one “flesh tone” though, which is unfortunate. And by “unfortunate” I mean “normalizes whiteness”). The angle is really good, the side that goes inside the wearer stays put better than others, it rubs up against the wearer’s bits better than others. It’s pretty hard silicone, so it doesn’t feel the best in someone’s mouth — it doesn’t have any give (especially after being spoiled by NYTC and Vixen). This is particularly noticeable for blow jobs, though sometimes also penetration. 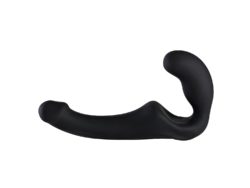 The Share is pretty good, though I’ve found the part that goes inside is super uncomfortable for my body. It’s a lot larger than others, and that doesn’t work for me. Others have told me the same thing. But if your girlfriend likes that feeling of being filled, it may not be an issue!

Edited to add: Vixen has just come out with a new vixskin (their ‘realistic’ line of silicone) double, called the Peacemaker. I haven’t tried it yet, but given their superior material, it basically automatically goes to the top of my list as The Best. (I can’t speak to why it has the dual-color thing though. Maybe it’s to make sure you know which end goes inside you? Maybe the creator just really likes purple? The other end comes in their usual vanilla, caramel, chocolate colors.)

Which harnesses to try 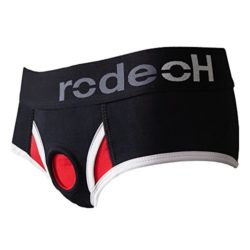 Personally I’m not a big fan of the RodeoH because I like really rough sex, and I like my harness to rub against me to keep myself the most stimulated. The RodeoH is too elastic-y for that. It might be a great one to start with, though, and one can always change it up to a material which is stronger! I know it is extremely well liked by most folks, particularly because it can be very comfortably worn under clothes. It works okay with double-ended cocks like Share + Feeldoe, but the o-ring is limited on the RodeoH. It still accommodates up to about 2″ (which tends to be the largest girth that most queer/women companies make their cocks), but the o-ring sits pretty high, which makes it hard to get the o-ring lined up with the double. But it’s stretchy, so some folks have no trouble making it work! 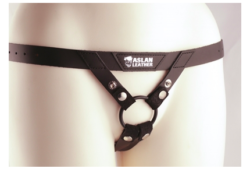 Part of the issue about harnesses and doubles is that the o-ring is in a very particular place, and the double comes out of a very particular place, and often they are not the same. So the best fix for this is to have a harness where you can change the length between the straps, the part that goes between the legs. Mostly that’s leather and other non-leather, rather than the underwear-type harnesses. Highly recommend: the leather pleasure harness, and the commando harness, both by Aslan Leather. Commando rides very low, which is helpful for doubles. Leather pleasure is highly convertible; the “driver pad” behind the dildo base comes off, it’s convertible to a 1-strap, and all the strap lengths and o-ring are changeable. 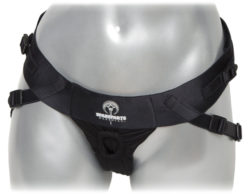 However, both those harnesses are a little harsh for bigger bodies — it can sometimes dig into my sides and that can be painful. For bigger bodies I highly highly recommend the spareparts Joque, it’s stretchy enough to be comfortable but still firm enough for rough sex … the straps (like a jock, not like a g-string) are changeable easily to move the hole down for doubles.

Purchase these toys at your local favorite women-positive queer-positive sex toy store, or at through these fine links. Most links in this post are for She Vibe, because they have an amazing selection. Some links are elsewhere if She Vibe doesn’t carry it. I get a little kickback if you buy anything through my links, but none of this was officially sponsored by She Vibe.