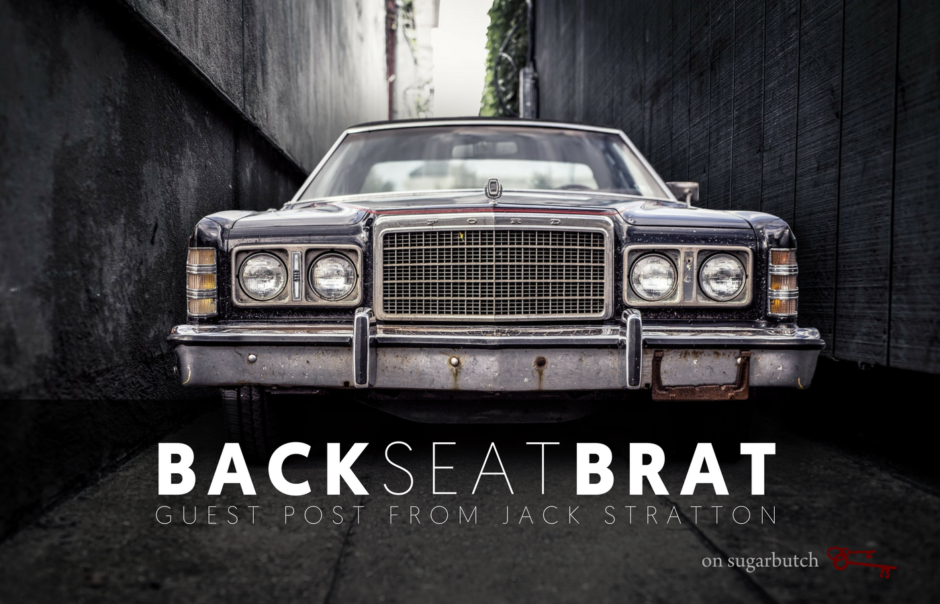 All characters in this story are over 18 and consenting adults.

The first time I met Lola was in the backseat of my cousin Tommy’s black boat of a Lincoln Town Car. She was one of his friends. Tommy had a crazy crew of friends — hippies, stoners, punks, and musicians.

Tommy let me hang with him during the summer break before my senior year of college. As I sat in the back, he pulled up to a bar and a few of his friends jumped in. Lola opened the door I was sitting next to and climbed right over me to sit in the center of the back seat. She was this little firecracker. Around my age. Short, feisty, jet black hair with bangs, and lips that were always bright red. She dressed all rockabilly, like some modern take on one of the girls in Grease.

We drove around for a while. Visiting Tommy’s haunts. Picking up beer. She didn’t say anything, she just watched me. At around eight, we pulled up to a burger joint and she looked at me expectedly after tap tap tapping on her phone.

“My Daddy’s not here, so you have to pay for my fries,” she said plainly, looking bitchy and bratty at the same time.

She didn’t laugh or even smile. She moved closer, sitting right on my hand, pressing her big ass down on it.

“Yeah it is. You have to or you can’t sit next to me,” she said threateningly. There was no irony there. It was a stupid juvenile thing, but it worked. She leaned back and stretched, pushing out her chest. I reached for my wallet.

Tommy left us alone in the car and went to talk to some friends inside. After eating her fries and most of mine, she chewed on her straw while she looked at me inscrutably. She unbuttoned the first few buttons of her navy blue dress, to expose a pink bra. I was hypnotized by her. She slowly traced the top of her bra with her finger, pulling it down a little, almost giving me a glimpse of more, all the time watching me.

“I think you like me,” she said with a self satisfied grin.

“I bet you’d rob a bank for a taste of my pussy,” she purred.

Her phone buzzed. She picked it up and read something, smiled, and then furiously typed a response. Then just like that, I was forgotten. She leaned over me, her hands pressing painfully into my shoulder and chest, rolling down the window next to me and sticking her head out.

“Tommy, we gotta pick up Frank!” she screamed.

With that, Tommy came back to the car and we headed for the bus station.

I saw him waiting there, leaning against a wall. Her “Daddy.” He wore a leather jacket, a white t-shirt, blue jeans, and boots. When we stopped he walked slowly to the car. He slid in the other side of the back seat, sandwiching Lola between us.

He was a little older than me. He had a chiseled jaw with some stubble. His hair was parted perfectly and slick with grease.

His hand went possessively to Lola’s knee. She turned and hugged him tightly.

“Hi Daddy,” she said almost breathlessly. Then she kissed him. I wondered if I should go sit up front, but we started driving. Lola and Frank whispered to each other. As they did, she became sweet and childish. Not the brat I had come to know, but some reflection of it. A brat who was put in her place.

“Him? The pretty boy?” I heard him ask her with a laugh as they both glanced at me. She cupped her hand to his ear and whispered more, with her eyes on me.

“Rob a bank, huh? I bet he would too,” he said with a chuckle. I blushed deeper, knowing what they were saying about me.

We drove to a pool hall at the edge of town and Tommy got out and went in. I got out too and took a few deep breaths of the night air. I heard Lola and Frank get out. I didn’t want to face them, but I couldn’t ignore them when I heard them whistle for me, as much as I tried. I turned to see them walking into the alley behind the pool hall. Lola was motioning for me to follow.

In the shadows of the alley I saw them making out. They stopped as I approached and looked at me expectantly. I walked to them, unsure of what else to do.

Frank grabbed me by the scruff of the neck and pushed me against the wall. “You been taking care of my girl while I was gone?” he asked, though he didn’t sound mad. “I’ll tell you what, kiddo, you want to play with her, you have to play with me a little first,” he said with bravado.

I looked around and laughed a little. He was joking, right?

He pushed me up against the wall again, the cold bricks against my back. His face was suddenly close to mine. “Come on, pretty boy, you said you’d do anything. She told me,” he growled into my ear. He smelled like aftershave and whiskey and cigarettes.

She was behind him, arms around him, lips near his ear, eyes on me. “Hit him, Daddy,” she begged and then bit her fat bottom lip.

He smiled at me, reached up and took my chin in his hand. It seemed like he was thinking about it, but then he turned away from me and grabbed her.

“What did we talk about, Lo? Good girls don’t make demands. What did we say?” he said, clearing his throat and walking towards her as she backed up and fidgeted with her dress.

“I’m not supposed to be a bossy little brat,” she said, looking down and fuming.

He grabbed her by the hair and spun her around. He flipped up her dress and smacked her ass. My eyes were glued to them.

He pulled up her dress a little more, exposing white panties with little hearts on them. He spanked her again, hard, and she let out a little yelp. A red mark the shape of his hand appeared immediately.

I followed his fingers on her skin, watching as he traced the mark he left, then the edge of her panties, slowly slipping just the tip of his finger under the thin material.

When his long fingers got to the crotch of her panties she arched her back and stuck her ass out as high as she could, standing on her on her toes. His fingers slipped between her thick thighs and I heard her let out a low whimper. I may have let out a similar sound.

I could see it, just barely. He pushed the fabric to the side just enough that a delicious little bit of pink was exposed and my heart was beating so fast it hurt.

“Well, kiddo, time to rob that bank,” he said, turning to with daring in his eyes. He slipped his finger across his bottom lip. I felt a scared little puppy whimper emanate from my chest.

My brain didn’t seem to command it, but somehow my body was moving forward.

He was tall. I felt small and clumsy next to him. He leaned down, then all I felt was stubble across my lips. It was embarrassing how much I wanted all of it, her taste, his mouth. He kissed me and I got light headed. My hand went up to his firm chest. I sucked his bottom lip and I could swear I tasted heaven.

He chuckled again as he let go of me and he reached up and grabbed my chin. He slipped one finger into my mouth and I sucked it greedily. His thick fingers pushed deeper into my mouth, two, then three.

“Look how much he take. Look at what a good boy he is, Daddy,” she whispered to him, right in my ear.

“What do you say, kiddo? You want to be my good boy?” he said, rubbing his hand through my hair.

“Come on pretty boy, don’t you want to suck my cock? Just think how much Lola would like to watch you. She’d probably do anything to see it,” he said pulling me closer by my hair.

I fought his grip a little, trying to pull away, but his hand tightened around the back of my neck. Did I want to suck it? It was complicated. It made me want to run out of the alley, but somehow I was sinking to my knees.

Lola was there with me, sounding excited. Then she was kissing my neck again. “Do it for me,” she whispered into my ear. “If you do it good, I can be your little girl tonight, too,” she promised

“Okay,” I choked out through a dry throat.

She rocked with glee and tugged at his belt. “You’ll be great, I’ll show you what to do. Maybe, you know, you can call him daddy too, if you want,” she said, and flashed a huge bright smile.

The smile of a spoiled brat that was getting exactly what she wanted.

Jack Stratton is a native Brooklynite, writer, feminist, dandy, switch, and most of all hedonist. He has been writing erotica for ten plus years on his site writingdirty.com and is hard at work on new stories and novels that mix the dirty and the literary.
View all posts by Jack Stratton → 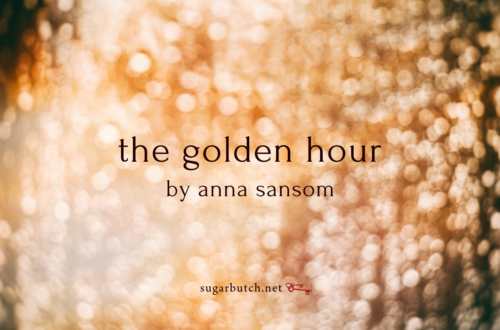 2 thoughts on “Back Seat Brat, Guest Post by Jack Stratton”