This essay, as with pretty much everything I write, is purely my own experience and my best understanding. I’m not trying to tell you what you should or shouldn’t care about, just sharing what my process has been around gender perception and genderqueerness.

For a little more than three years, I’ve been using they/them/theirs/themself pronouns. Notice that I’m avoiding saying that I “prefer” they/them pronouns, because, as many gender activists have been discussing lately, it’s not exactly a “preference.” I prefer green grapes to red grapes, I prefer almond milk to soy milk. But the accurate pronoun for my gender identity is they/them/theirs/themself.

Using a pronoun outside of the standard gender binary is a lot of work on a daily basis. Sure, I do spend most of my time inside of genderqueer and trans communities, and many of those folks are super smart about gender and either ask about pronouns or already know mine, and like to call people what they like to be called. I’m surprised how good it makes me feel when people get my pronouns right, actually. And because often I don’t hear people talking about me—which is the only time they really refer to me in the third person—I don’t hear it very often. The recent Sweet & Rough blog tour is a thrilling example: it pretty much brought tears to my eyes every time the folks on the tour referred to me using they and them. My inner kid—you know, the one who thinks I’ll never be understood or seen or valued—gets all hopeful and touched, and feels vulnerable and seen. I think things like, “Really? You see me like that?” and “You get it! Omg you get it!” and “Are you just humoring me? Or do you really get it?” and “Ergh, I hope it isn’t too much trouble for you to understand that!” and … I feel such relief. My shoulders relax and my body lets go of just a little bit of the tension I always carry.


This is box title
Am I mad at the system? Fuck yes. Am I working on changing it? Absolutely.

Every day I encounter a world that doesn’t see the in-between, and that either addresses me as “sir” or groups me in as part of the table full of “ladies,” aka queers of sometimes five different gender identities. I suppose worse still is “miss,” but that just gets me on a feminist rant about women having multiple honorifics dependent on their marital status and all men are addressed as “mister.” And then I remember that the second wave popularized “Ms”—oh right, we already fought this fight, except that clearly it hasn’t permeated society enough because this guy in front of me is still calling me “miss.”


Am I mad at the system? Fuck yes. Am I working on changing it? Absolutely. Are these moments microagressions? Fuck yes. Do the little needles that are microagressions add up, becoming a seeping wound by the end of any given day? Yeah. Could I just take my toys and go home and become a hermit to avoid dealing with this? Yeah. And sometimes I do, and sometimes I really want to.

But after three years of really claiming the identity of genderqueer … honestly? Being misgendered doesn’t bother me as much anymore.

I rarely correct the pronouns people use for me. I tell them if they ask, absolutely. I have lots of conversations about why they/them is the best choice for me, why I use it rather than ze/hir or other gender neutral pronouns, or why it’s grammatically correct despite the rules saying it is plural.

(Short version: I believe language is fluid, and our uses of it change over the years. I find it to be the least awkward in speech and written flow because we’re already used to it as a pronoun in other contexts. If people want to prioritize holding tight to grammar rules instead of smashing the gender binary and evolving our language to reflect the changes and include thousands of folks who are in-betweeners, well then, I guess I have to reevaluate just how close I want to be with that person. As much as I get a boner for really strict grammarians, to see the rules as so rigid that they cannot be malleable to include folks who are marginalized out of our language is not the kind of poet activist I want to be.)

When all those folks out there in the world out there misgender me, calling me sir or ma’am or ladies or she or bro or miss or whatever they might be using, I let it go. It might prick me for a moment, so I store that away as fuel for my activism, and then I try to remember: I don’t need their validation.

This is box title
It might prick me for a moment, so I store that away as fuel for my activism, and then I try to remember: I don’t need their validation.
I have so much validation from my genderqueer and trans communities, from my family of origin, from friends far and wide, and from folks I never would’ve expected to step up and be an ally. I feel so seen and honored, so often. I recognize that my position is possibly a unique one, where I really haven’t had any fallout from coming out genderqueer to my family or at my job (which, ahem, is what I’m doing right now). I know many folks don’t have that kind of acceptance from their families of origin, or their closest friends, or coworkers, or the communities in the cities where they live, or even sometimes their partners. But many of us do get lots of support, too.

Because I have so much validation from my close, inner circle communities, and even validation from broader queer worlds, and hell, from more and more people even outside of my inner circle, I don’t need the validation of the bus driver or the guy at the deli counter or the barista at the coffee shop. I just don’t. They don’t see me as genderqueer? Okay, whatever. Or hey, maybe they DO see me as genderqueer, but they don’t really have language and words for it, and even though they’re feeling that hey-you’re-not-quite-the-usual-kind-of-person-with-breasts thing, it doesn’t occur to them that that means not to use the term “lady” to address me. I am interested in doing more activism to educate folks in service professions to use words that aren’t so starkly gendered to address people who are in-between. (I even have a super secret project in the works about this.)

But I don’t need them to understand my gender in order for my gender to be real, seen, valid, and honored in the world.

It’s the difference I suppose between “gender identity” and “gender perception.” It’s only in the last 100 years that the concept of one’s “sex” has been divided into “sex and gender.” As gender theory has evolved, there are many words within the concept of “gender” and what it is. Gender identity is generally (I mistyped it as “genderally”) the identity that I see myself as. For example, I see myself as genderqueer, trans, and butch. Gender expression is usually how you’re expressing your gender verbally and with energy, and gender presentation is usually how you have decorated your body and the visual presentation of it. For me, that’s usually butch and masculine.

Gender perception is how others see your gender. 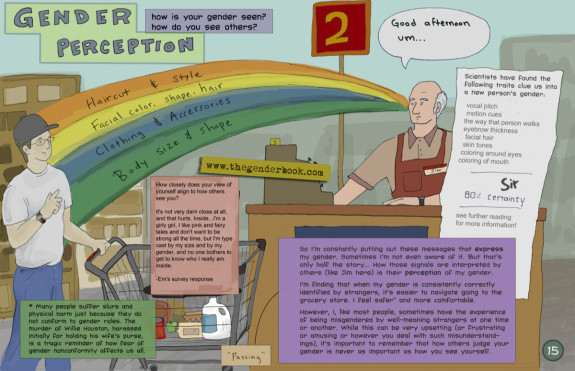 I do understand that gender perception is a serious source of distress for many folks, feeling that if the world doesn’t see and reflect that I am a certain gender, then I am not that gender. It can be devastating to not be recognized, I do understand that. But for whatever reason, it’s not that important to me.

Or wait—let me rephrase that. It’s very, very important to me to be seen and recognized and understood by my communities and my lovers and my family, and sometimes it takes a lot of work to educate and inform and correct and encourage folks to do so. But it’s not that important to me that the world at large understand and get my gender identity and pronouns right this minute. I just understand that the majority of people haven’t deconstructed the gender binary in a way where they can even see beyond it.

Remember that part in the HBO series Six Feet Under, where Claire, in art school, is trying to “break her eye open,” to see new perspectives and outside of her habits? Most people haven’t broken their eyes open to see more genders, yet.

This is box title
Most people haven’t broken their eyes open to see more genders, yet.
When it comes to my communities and inner circles, seeing me and reflecting that they see me is important to me. And that’s partly because of validation, yeah, but it’s also because of intimacy. The more they really see me, the more I feel like we are close and that they really get who I am and how I work in the world. That makes me feel vulnerable, touched, and honored. So really, my genderqueer identity and in-between marginalized place and pronoun use mostly matter for intimate relationships and moments.

I want to encourage that process of breaking your eye open to see more genders for everyone, not just within my communities of radical sex and gender minorities. But the frustration I feel when the larger society doesn’t get my gender stems from my unrealistic expectation. In a way, it’s just arguing with reality.

I’d love to figure out a way to address those misgenderings more easily in the moment, but usually it takes more than just, “hey, don’t call me lady,” for someone’s eyes to break open.

Right now, I can’t change this thing—this problem that the larger culture hasn’t broken their eyes open to more genders yet. I’m doing what I can, and being part of movements that are trying to get that culture broken open, and it is happening right now, the effects are huge and frequent. I can’t change this thing, but I can change my relationship to this thing. I can choose to funnel the pinpricks of not-belonging into more activism and work. I can keep encouraging people to break their eyes open to myriad genders, and I can look to my communities as a source of my validation and intimacy around my gender identity.

Illustration of “Gender Perception” by The Gender Book, reprinted with permission

18 thoughts on “On Gender Perception, or: Break Your Eyes Open to Genderqueers”