It’s happening right now! Well not quite right now, since it’s earlier in New York City than it is over in Oakland, on the other coast where the sun sets over the water just like it’s supposed to.

The 2010 Femme Conference: No Restrictions begins today and an extravagance of femmes have gathered, including Kristen.

How do you like that collective noun, by the way? An extravagance of femmes? Not bad really. There’s a fascinating collective noun site connected to Twitter so that when you tweet your suggestion for the collective noun with the hashtag #collectivenoun it gets automatically updated and counted on the site. Plus, you can “like” other people’s suggestions (which also goes to Twitter). So what say you—what’s the best collective noun for femmes? Tweet it, or leave it in the comments. And check them out as they come in.

Okay, enough of that. You’re dying to know what the femme book is for today, right? Since we’ve got the Butch Voices regional conferences to count down to now, in NYC (September 25), Portland OR (October 1-3), and LA (October 8-10), I figured I’d do a butch/femme joint anthology.

There are other good femme books out there, though, don’t let me mislead you into thinking that Visible: A Femmethology, Femmes of Power, and The Femme Mystique are the only ones. There’s also:

So now that I’ve recited pretty much every femme book that I know of and think are worth knowing, let’s get back to today’s feature. The Persistent Desire: A Femme-Butch Reader edited by Joan Nestle, published by Alyson Books in 1992. It looks like it’s out of print, but you can probably still get it used in various places, like Powell’s online or, of course, Amazon (but only if you have to. Don’t you want independent bookstores to stay in business?).

The description of The Persistent Desire from Library Journal is as follows:

This anthology of stories, poems, and nonfiction accounts pays homage to a host of femme and butch lesbian relationships that have flourished over four decades. The narrators recount their experiences, describing how they met, how they took care of one another, and how they tried–or defiantly tried not–to fit in. The selections themselves bubble with passion and pain. Some dive beneath the surface to explore the varied meanings of gender roles, but most describe highly ritualistic manners of dress, hairstyle, and gesture that at times left the protagonist open to ridicule. In collecting these pieces into one volume, Nestle has made sure that the integrity and diversity of femme-butch relationships will not be lost. She has included narratives from women of many backgrounds and ethnic groups and from outside the United States.

This book was for me, as it was for many people, eye-opening, validating, breathtaking. I found it while I was still trying to articulate my own butch identity, and come into my orientation of dating femmes, and it blew past most of my doubts as if doing 80 on a motorcycle. I wanted to be part of that, I felt so connected to it. It changed the way I thought about myself and the way I thought about femmes.

It’s dated now. It was published almost two decades ago, and it reflects a different era of thought about gender identity and alignment assumptions. And while the trans movements were alive by then, much has happened on that front in the past 18 years since it was published and much transgender theory has affected gender theory deeply in wonderfully deliciously complicated ways.

We’re really due for an update.

And how about that, one is just on the horizon! Partners and butch/femme couple Ivan E. Coyote and Zena Sharman have been working on an anthology titled Persistence: All Ways Butch and Femme (see the connection to the first anthology’s title? Smart!) that is due out from Arsenal Pulp Press soon. Not sure what the exact date of publication is yet, but you can be certain I’ll be mentioning it here again. It looks like Ivan just picked up the postcards for the book from her publisher the other day, so it must be coming fairly soon! I will report back as I know.

There are more books, especially more butch/femme books, and more books just on butch identity by itself (look for more of those featured on the upcoming Fridays as we countdown to the Butch Voices NYC conference). I’ve made a new section in my Amazon Store exclusively for butch and femme books, so if you’re curious what else is out there, that’s a good place to start. And if you’ve got suggestions for what I missed, I’m glad to hear ’em! 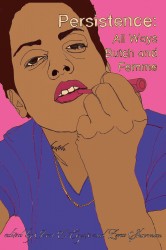 UPDATE! Persistence: All Ways Butch And Femme has a webpage on Arsenal Pulp Press, a description, and is due out in the spring of 2011. Isn’t that cover great? It’s done by Elisha Lim, who also has a book of her own newly out from Alyson, 100 Butches, Volume 1.

If you see Zena at the Femme Conference, she supposedly has postcards for Persistence, so that’ll give you an excuse to say hi. She’s aka “The Silver Fox” because (guess) of her hair, so that should narrow it down for ya.

(Don’t you just love the Internet? I do. Thanks, Arsenal, for answering those questions.)