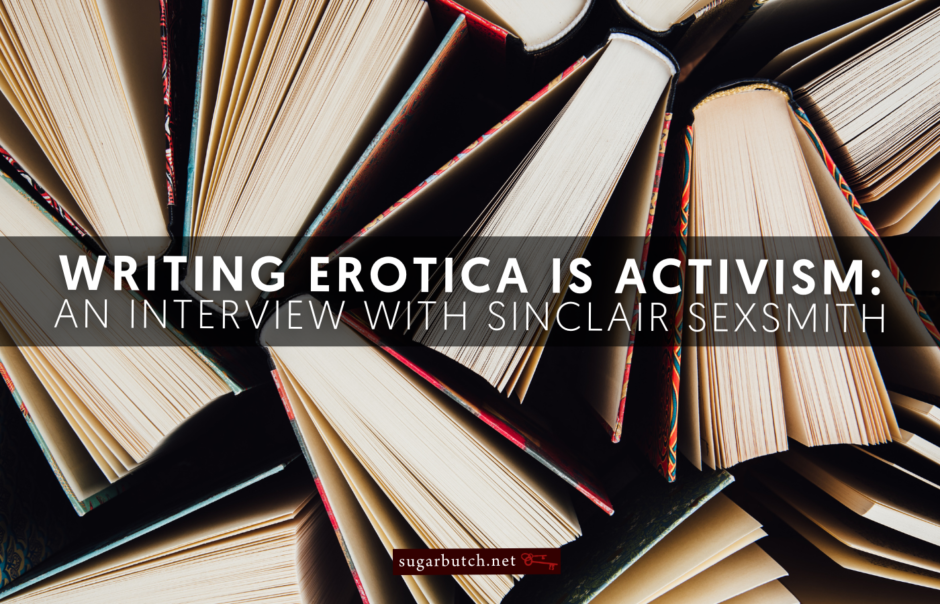 Rachel Kramer Bussel is writing a book on how to write erotica, titled How to Write Erotica, and it should be published either in late 2022 or early 2023 from Cleis Press. She interviewed me recently for the book and is going to use excerpts from it within the book — so here it is, in full. Can’t wait for the book!

What drew you to erotica as a reader?

I’ve always been fascinated by everything erotic, since I was a pre-teen. I started reading it because I would pursue the bookshelves of the houses where I babysat, after the kids would go to bed, and try to find anything salacious. At one house I found Nancy Friday’s book My Secret Garden — I devoured it, and I was hooked. I went on to buy all her other books that I could find, and then some of the books that were shelved next to hers in the library and bookstore too. It was really good to read that when I was young, I was probably 14; it’s a compilation of “women’s sexual fantasies,” some were written and some were audio interviews by Friday. It covered every fantasy I could think of and dozens more that I never would have thought of, and there was a whole section with women describing ways they masturbated (bathtubs, candles, screwdrivers, pillows), so I promptly tried all of them.

When I came out as queer later, when I was about 19, I devoured all the lesbian erotica I could find, trying to ask and answer the question of what women do together and what queer sex was like. I found the Best Lesbian Erotica series in 1999 and was again hooked, and have followed the series and read every one ever since.

When and why did you get started writing erotica? Where were you first published?

Why have you continued to write erotica on an ongoing basis? Has writing erotica affected your personal/non-writing life in any way?

Writing erotica is many things for me: it’s activism, as making queer, trans, nonbinary, and kink identities visible is a big deal and continually important to share what queer people do as ideas, roadmaps, options for folks who are coming in to these identities. It’s also a personal inquiry for me, very full of introspection and omphaloskepsis, and it is a way that I both process the world around me and push myself forward into my own evolutions. I use erotic writing as a tool to become more myself, explore myself, and write myself toward what I want and who I want to be.

How did you decide on your pseudonym?

When I started Sugarbutch in 2006 anonymous blogs were much more common and popular than they are now, so it made a lot of sense to use some anonymity and a pseudonym. Claire is one of my favorite names, so I started there, and adding “Sin” as an erotic pseudonym made a lot of sense — I was looking for a way to make it more masculine. The “Sexsmith” part came later, it was just Sinclair for a long time, until I started being asked to do things and it became more apparent that I needed a last name. I was asked to be part of a documentary about sex blogs in New York City and started hunting for a last name, and I saw an interview with Ron Sexsmith in a magazine and it clicked.

How do you define erotica?

What do you think sets your erotica apart/makes it unique?

My work is explicitly queer and kinky, and usually contains butch/femme dynamics, butch/boy dynamics, nonbinary and trans characters, dominance and submission, consent, aftercare, and a rich internal emotional world. I see my work in a lineage of writers like Patrick Califia, Xan West, Carol Queen, and many other leather and kinky writers who have come before me.

How do you get ideas for your erotica?

Mostly from my own life — either from scenes I have actually had, from fantasizing, or from community and friends’ inspirations and ideas. Sometimes I’m challenged to write something a certain way, sometimes I challenge myself and sometimes that comes from writing friends or mentors.

Which methods have you found to be the best ways to promote your work as an erotica author and/or editor, and why have they been successful for you?

As an erotica anthology editor of the Best Lesbian Erotica of the Year series and other titles, what do you look for from story submissions?

I look for strong interior landscapes, emotionality, fleshed-out characters, unique and realistic situations, and stories rooted in queer experiences and community. Ideally, I want a wide range of gender expression, sexual expression, kink expression, race, neurodiversity, and ability, so I’m always looking for those too. I don’t always get those, but they stand out when I do.

What advice would you give aspiring authors?

Find and create a writing group — that is the best way I’ve found to keep challenging myself, get feedback, and learn to love the editing process. Also, the age-old advice of collecting 100 rejections is also a very worthy pursuit, as it really helps build up that muscle for submitting pieces and not being as disappointed by rejections.

Is there anything that you see in submissions that puts a story in the immediate no category?

Nonconsent and cheating would immediately be nos, unless I can see a way to edit it out simply. Because this particular series (Best Lesbian Erotica) is intended for a very general audience,

Who are 1-2 of your favorite erotica authors and why are you fans of their work?

Patrick Califia and Xan West are two of my favorites of all time. They inspire me personally, with their depictions of kink, responsibility, ethics, and trans content, and they inspire me professionally to write the dark, dirty stuff, to go for the jugular, and to include the messy, human aspects of sex, kink, and relationships.

Have you ever faced any negative repercussions from writing erotica and if so, did that change how you approach the genre?

Not really. The only negative repercussions I can think of are from writing memoir explicitly about people that I slept with or dated, without their permission — and that is more about me not getting consent than it is about writing erotica in general. That was years ago, and I don’t do that anymore; if I write about people explicitly (which is rare) I always get permission from them and let them see the work first before I publish it.