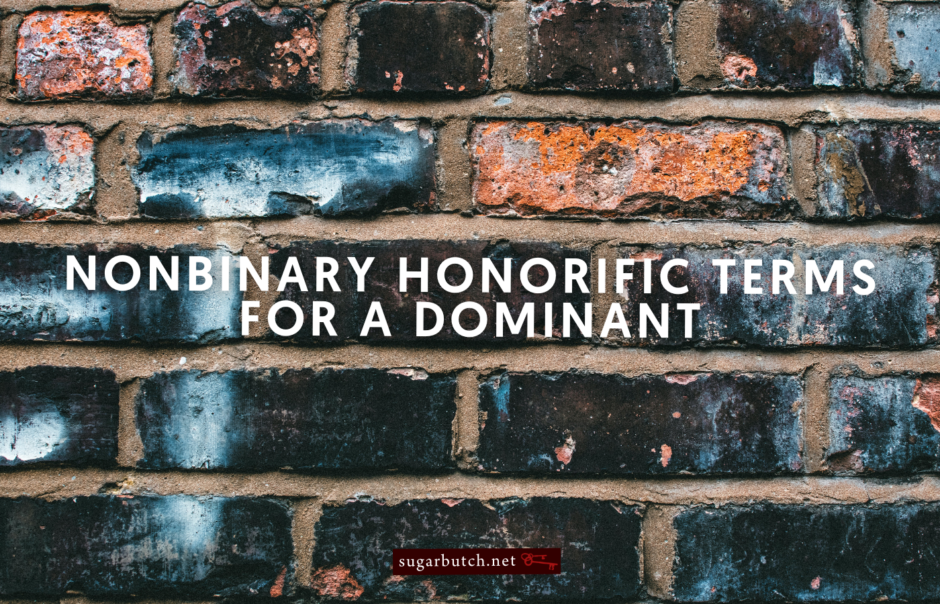 In the nonbinary D/s groups I was holding last year, this question came up so frequently: What titles and honorifics do we want to use for a nonbinary dominant?

The usual are all so gendered: Sir, Ma’am, Mistress, and (that term with much controversy, that I’m not personally using any longer) Master. There have been plenty of arguments that even the gendered dominant terms are still, in fact, gender neutral, and can and should be divorced from gender and taken up by anyone who resonates with them. I generally agree with that — I think if we find a word that resonates and feels like it conveys the kind of dominance that we like, that is probably a good one to use.

The most common “gender neutral” or nonbinary honorifics I hear suggested are Mx, Mixter, and Mixtress, but they still are a little bit gendered in their form, and the x is often pretty awkward for people to pronounce. Perhaps we’ll get more used to it in years to come, and we’ll see a rise of its use. We’ll see.

But there are many others! Such as:

A quick Google search brings up a few more resources, and here are a few good quotes from them:

“You could go the medieval route, ala “Your Grace” or “Your Majesty”. You could do a military route, like “Commander” or “Captain”. You could go a 90s anime gangster route, like “Boss”. Or you could be more sappy and be addressed as “Beloved” or “My love”.” — From the Genderqueer Reddit 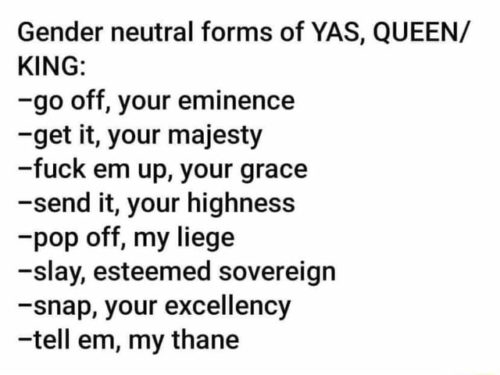 This image has also been making the rounds on social media (original source unknown). I do want to remind folks that “Yas Queen” is AAVE, as it is cultural appropriation for white folks to be using those phrases. One of the many reasons it’s important to know where your phrases come from, what the linguistic cultural history of them is, so you can be certain to stay respectful.

Still, it can help us get thinking about things to call dominants or tops who are in between genders, or for whom the gender doesn’t quite fit right.