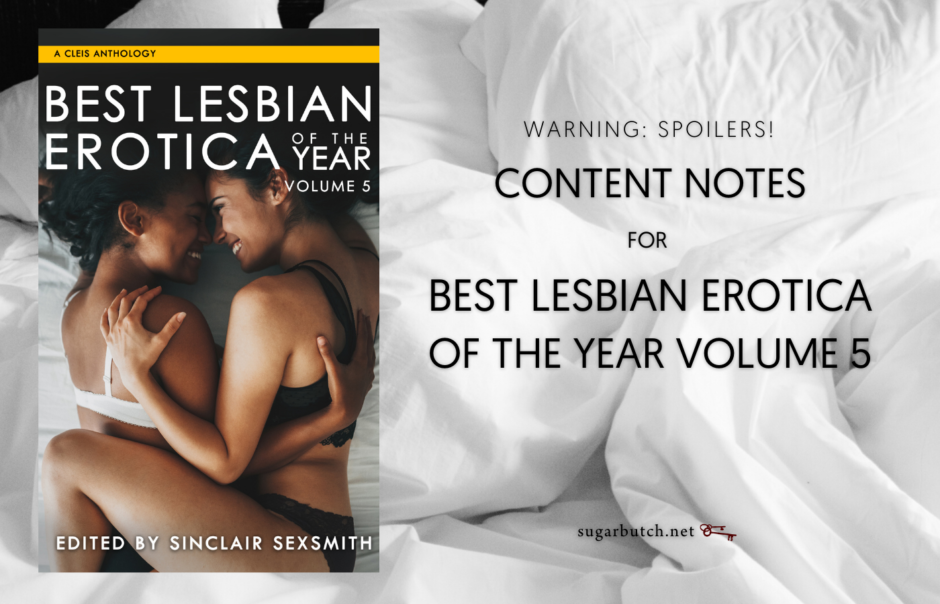 There are 17 stories in Best Lesbian Erotica of the Year Volume 5, and here’s a little bit about each one. Hopefully this will give you a sense of the types of stories to see if it’s the type of things you like. If your favorite thing is missing, would you let me know in the comments, or send me an email — I’d love to know about it, and maybe I can get something into the next volume.

Needless to say, this will contain spoilers and details about the stories! Stop reading now if you want to be surprised! Included are the genders of the characters, types of sex acts, types of issues that they grapple with.

1. Max and the Things I Couldn’t Say — Heart 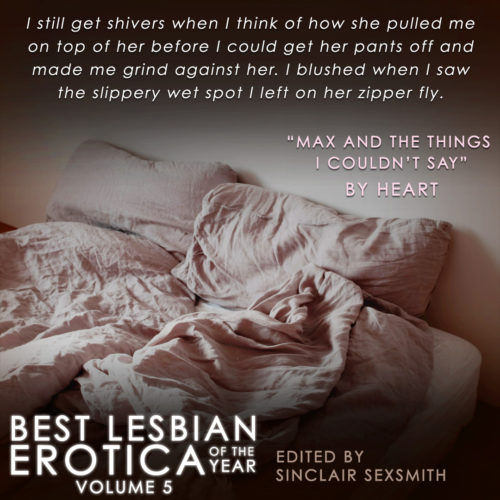 Narrator and lover both use she/her pronouns and narrator is called “girl.” Butch/femme. Narrator ponders her submissive, masochistic fantasies, but the lover is mostly vanilla. They play-fight. Very sensual. 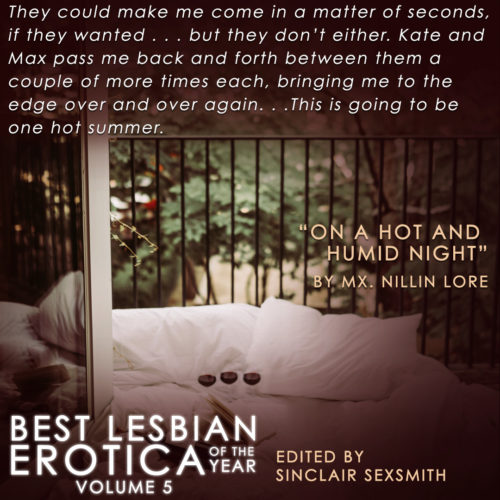 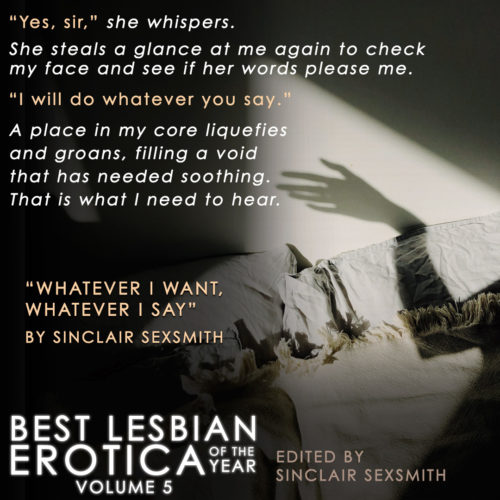 Butch/femme, D/s. The characters genders aren’t described in depth, but you could read this as the “Sinclair” character as the narrator, so that person would be nonbinary and the submissive is a femme. Open relationship, “borrowing” another person’s submissive for a scene, some dirty talk, mostly teasing. 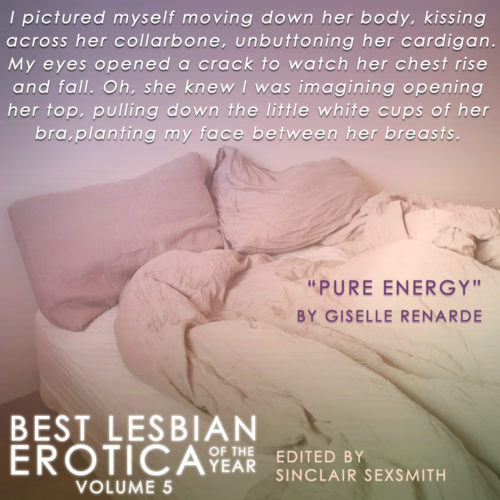 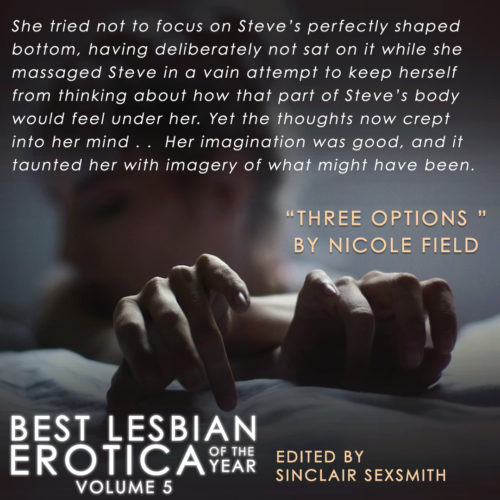 D/s with the characters called “Miss” and “angel,” using she/her pronouns. Asexual spectrum, with some discussion about what that means for the characters and how they navigate sex. 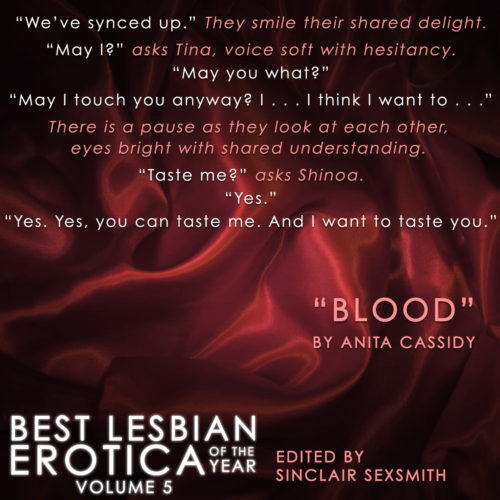 Both characters use she/her and are described as women. The scene starts with a call and request to come over, and then it’s discovered that both women are menstruating, and they explore what it’s like for blood to be present during sex. 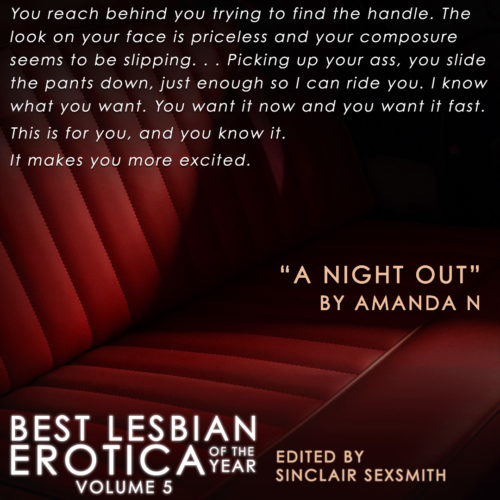 The narrator is wearing a dress and the lover is wearing a strap-on, but their gender isn’t clearly identified. You can infer butch/femme from it, though it could easily be two nonbinary people. (Ask Amanda, when we do an author Q&A.) The scene includes going out into public at a bar, flirting with someone else, and having jealous, possessive sex together at the end. Some D/s components. 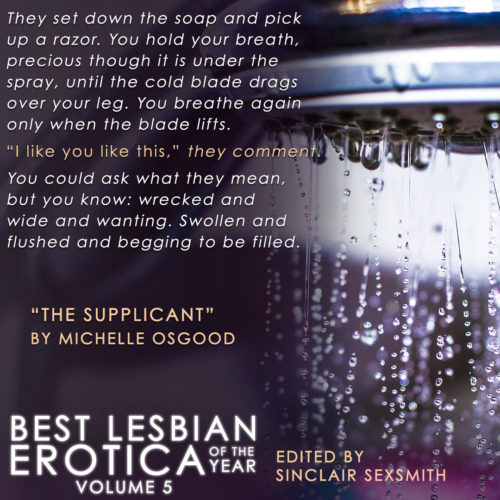 Narrator is described as a girl. Lover’s gender isn’t specific. Sex takes place in a shower, and it seems like stranger sex, but one gets the impression they do this a lot. Lover has a strap-on, and a straight razor, and shaves the narrator. 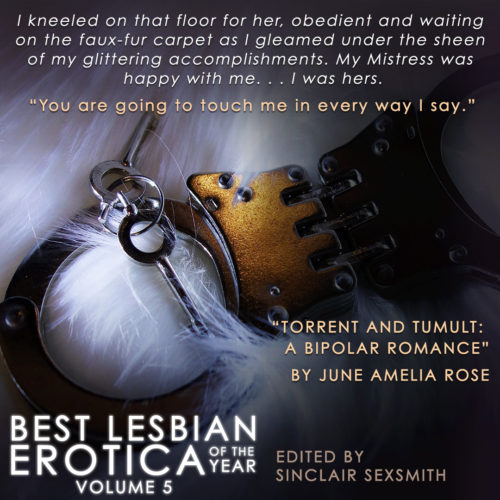 Author is bipolar, and both main characters in this piece are bipolar as well. D/s story with two trans women; the dominant is called Mistress. Includes punk rock, Brooklyn, AA/sobriety, chastity, spankings with a paddle, blood. Descriptions of kink as a healing practice. 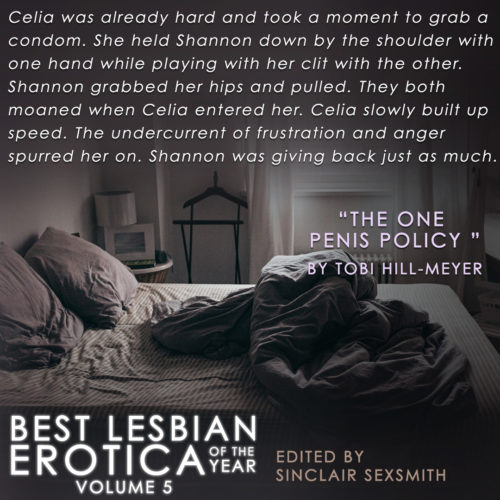 Narrator is a trans woman, dating a cis woman. The cis woman lover has a husband and is bisexual, and their open relationship agreement is a “one penis policy.” The characters sort out what that means for them. Descriptions of sex and orgasm. Written by a trans woman.

11. The Summer of Strap-Ons and Sodomy — Rain DeGrey 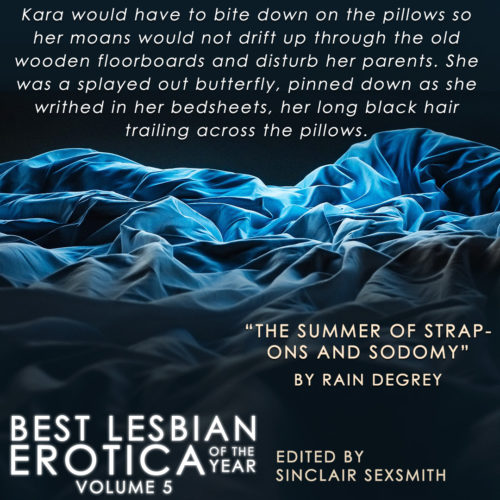 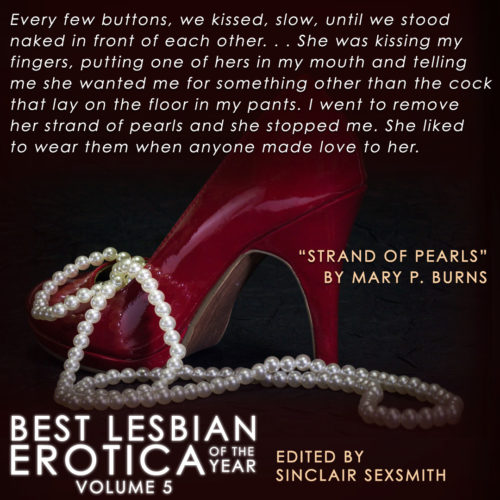 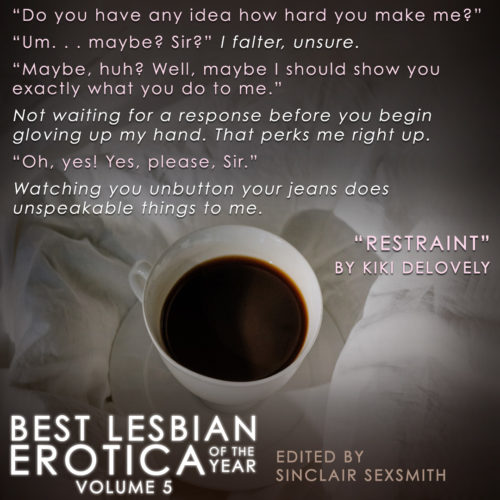 14. I Wouldn’t Be the Same Without Her — Kathleen Lamothe 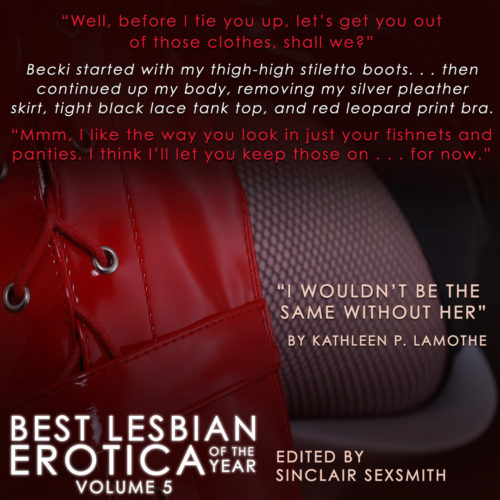 One night stand. Narrator and lover are trans women, lover is a little older and more experienced and teaches the narrator. Some scene-based D/s, bondage, orgasm control; lover requests to be called Ma’am. Some discussion of alcohol and AA. 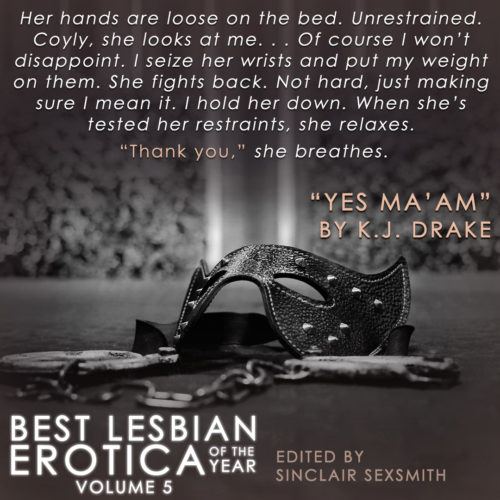 Narrator is called ma’am in the D/s context but admits to being uncomfortable with other gendered words, I would classify as non-binary (but we should ask KJ). Lover has she pronouns and generally reads as a woman. Sex scene includes restraints, oral sex, strap-on. A safeword is used, and characters check in about it. KJ included this content note: implied consent within an existing relationship, dominance, breath play, orgasm control, fluid-bonded sex. 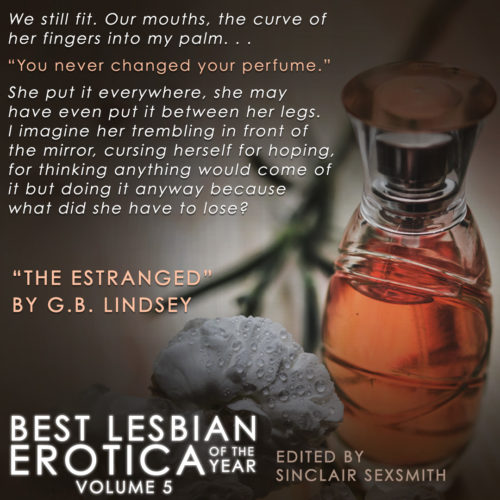 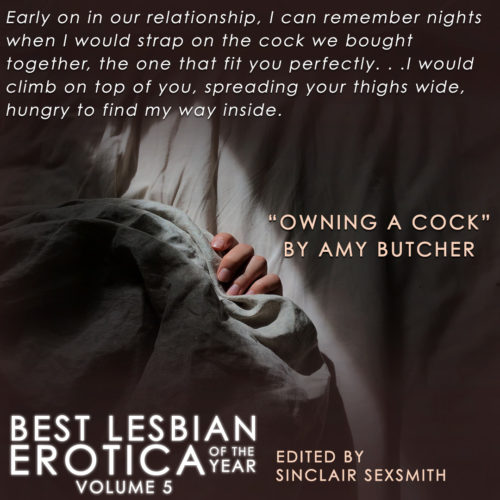 Opens with a Dr. Seuss-like poem! And proceeds into a meditation on dyke cock of all kinds. Descriptions and memories of a blow job, and brief descriptions of sex.

Well, there you have it: Volume 5.

I’m really proud of the different kinds of nonbinary and trans representation, and of the asexual and greysexual content in this book. What is probably obvious to you, and it’s definitely obvious to me, is that there are some voices missing, particularly Black women and nonbinary authors, but also people of color in general. There are a few authors and characters who identify as POC in this anthology, but not nearly as many as I would prefer. I’ve been working hard this year to build up my connections with BIPOC erotica authors, and to do research and read the BIPOC authors who are out there already. If you have any favorites, please let me know, I’d love to read more and I’m still learning. I am working hard to get more of that to happen in Volume 6 and I would appreciate any suggestions you have for connecting in with Black queer women and women of color who are writing erotica.

One thought on “Content Notes for Best Lesbian Erotica of the Year Volume 5 (Warning: Spoilers)”