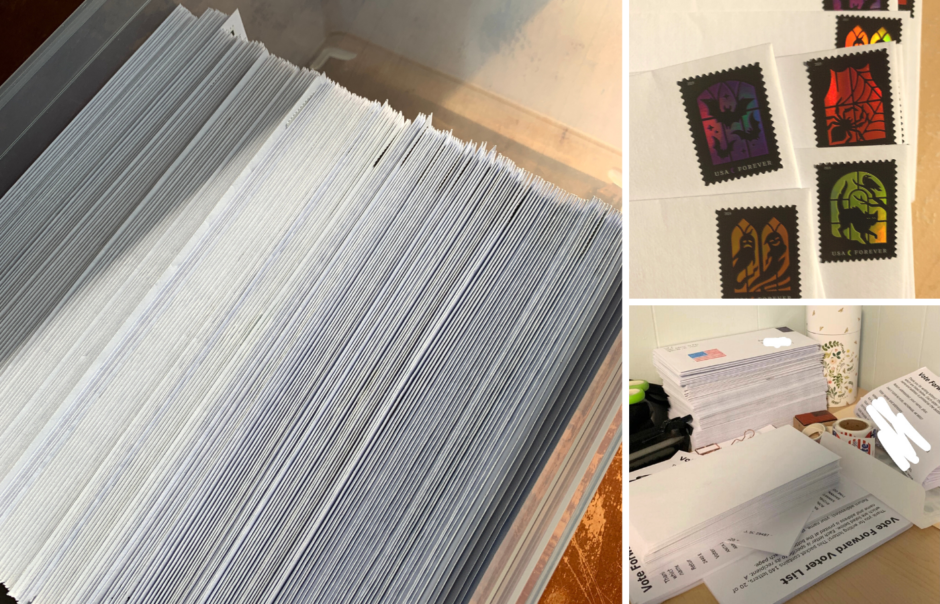 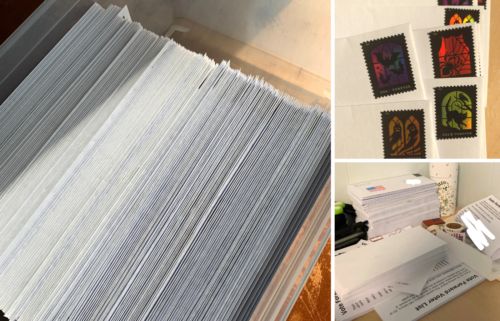 wrote 200 letters (with hunter’s help) for the Vote Forward campaign and mailed them today to voters in Texas, Alaska, and South Carolina. pretty simple: write a letter to a voter who, by some algorithm, was found to be unlikely to vote. they provide a little template and some blank spots to sign the letter and write in a little bit about why you, the letter writer, vote.

I’ve found it to be meditative, and a positive place to put my anxiety during the lead-up to the election, but also a very curious practice connecting to 200 strangers throughout the country. what would make this particular person vote? I would wonder. what could I possibly say to them that would encourage them to vote, if they’re thinking that they won’t? and why *do* I vote, anyway? how do I narrow that down into two or three sentences?

I ended up writing things like: I believe participating in the process to choose our elected officials is an important way to ensure democracy. I want a say in who makes laws that affect all of us. I care about climate change, health care, and education, and I want to make sure those in government care about it, too. I want to ensure that the people in government know what we, the voters and citizens, care about. I believe voting is an important part of my job as a citizen.

I don’t know if this will encourage any of the folks that I wrote to, but I found myself a little surprised at the answers.

I’m so curious about *why* we vote and why we don’t, and what would inspire more of us to do so. I remember hearing that in australia, voter registration and attendance at a polling booth have been mandatory since the 1920s, and their voter turnout is around 91%; australians can be fined up to nearly $80 AU if they fail to vote. but why would voting not be mandatory? I know: politics. but. things don’t have to stay the same; change is possible.

I know there are many things this country could do to help voter turnout long before voting is made mandatory — we could, for example, not actively try to disenfranchise and prevent people from voting, for example, which seems to consistently be happening through all the elections I remember paying attention to. voting day could be a holiday. we could have more polling places so people wouldn’t have to wait in hours-long lines.

a TED talk I watched the other night talked about the joy of voting, and the question of what we, as a culture, make of voting. is it a cool thing to do? is there social pressure? there certainly is in my circles, but I am in a bubble inside of counterculture radical justice communities — I don’t think I really see the mainstream.

preparing 200 letters felt useful, and I’m thrilled to be part of a campaign that sent 16.8 million letters today. between this and also seeing all the news about early voting coming in, I’m feeling hopeful, actually. haven’t felt that way in a long time, maybe not since march.

I might do some text banking next … I also filled out a form to work the polls day of, I’ve never done that, but I never heard anything so I’m unclear if I’ll do that. we’ll see.

what are y’all doing in the next 17 days before november 3 to support people voting? what’s your plan to vote yourself?