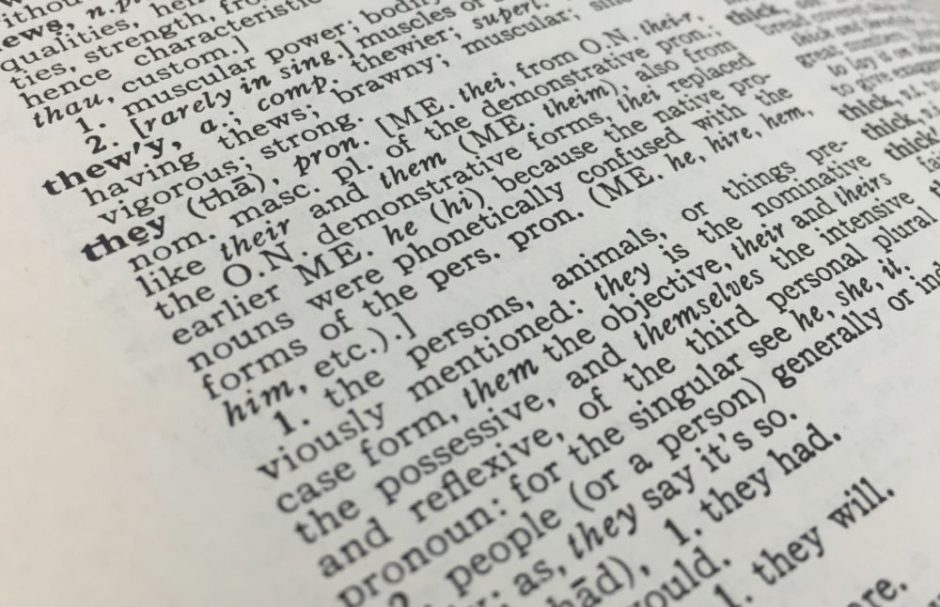 I just read your identity pronoun piece on Medium and I would like to converse with you about a few questions I have.

My child is currently identifying as non-binary. My only issue is from a grammar stand point. I struggle with referring to an individual in a plural way due to years of grammar education. I truly feel that I (and possibly others) may catch on quicker if it didn’t seem like we were being incorrect with the grammar by being correct in addressing the person.

I truly ask this with an open heart and mind. Do you think due to the creation of the subset — or acknowledgement as it were- that it may be easier for those outside the set to be mindful and those in the set to become recognized?

I look forward to your commentary.

This is a real email that I received, though I did edit it to be shorter.

Here is my reply.

I hear ya with the kind intention of this question. You’re not alone in asking it — many, many people do not like the use of the “singular they” as a nonbinary pronoun.

Here are a few resources for you.

Other options for third person pronouns:

Many transgender, gender non-confirming (GNC), and nonbinary folks in the US have been using pronouns aside from he or she for decades. Ze, hir, zir, xie, ey, and per are just a few that some of my community has used over the years. Here is a table of many of the different third-person gender pronouns used in English.

In GNC communities, people choose which pronoun they feel best fits them and resonates for them. The use of the singular they was always one of many, but it is only recently that it has become widely accepted in the mainstream English speaking / US environment.

Why singular they is okay:

Singular they was declared the word of the year by the American Dialect Society in 2015.

It has been in consistent use as a third person singular pronoun since the 1300s. Shakespeare, Chaucer, and Emily Dickinson all use it in their work. The wikipedia entry on it breaks it down quite well. Here is another longer history of the usage of the singular they.

Whether or not you realize it, most people already use the singular they. It is just used more generically, rather than individually. Teen Vogue has a good write-up of the common questions asked about nonbinary pronouns.

Because singular they has been used for so long, it is generally the easiest third person nonbinary pronoun for people to grasp.

Which do you think is easier to say?

I get that it’s hard to change the use of something that has always been one way. But language changes all the time. Here’s a list of TED talks that discuss how language is fluid and changes.

Language is solidified by those in power. Those who have been in power have been (are) cisgender people. But language is more of a living thing that both reflects and shapes cultural norms. Changing the language changes the oppression of marginalized people.

Using singular ‘they’ also helps with another major feminist linguistic issue: the way we default to using he/him pronouns as general examples in English. Using they/them solves that problem, and is much less awkward than using “s/he” or “she or he,” and challenges the use of maleness as the norm.

Here are two books for you:

Perhaps this part is the most important:

It takes uncomfortable change to be inclusive and supportive of marginalized people.

Yes, it can be uncomfortable to use the singular they. Yes, it means you will probably mess up as you are getting used to it, and perhaps hurt some people’s feelings, and perhaps have to apologize and learn and do better, and that is uncomfortable. But it is essential to try in order to make a world that can be more welcoming, inclusive, and celebratory of marginalized and oppressed folks.

This is a very clear, very concrete way that nonbinary people are asking to be supportive. Please do it.

Last, but not least:

Please consider doing your own Google research before asking nonbinary people, such as myself, to do research and explain things to you. This has taken an hour of my time that I could be otherwise working for money, being with my friends, or creating my own art.

I decided to do this for you because I am going to use this as my next article and make it public. But next time, please use Google — or a librarian, whose job it is to help you find information! — and educate yourself. There are thousands and thousands of articles, videos, and offerings online that already explain the things you’re asking me.

Things you could Google for additional research:

Next time you ask for labor like this, at least offer to compensate. I do coach people on gender, sexuality, and relationship issues, and I would be happy to consider coach you further. Contact me if you wish to pursue that.

If you agree with me, great. Please share this.

Perhaps you do not agree with me, and you’re one of those people who only uses “cool” to describe temperature. But if you insist on prioritizing grammar rules above honoring nonbinary people, I insist on thinking you’re a jerk.

PS: If you appreciate the time I put into this article, please consider supporting me on Patreon or making a PayPal donation to my email address, [email protected]

One thought on “The Singular “They” Is Grammatically Correct, Dammit”