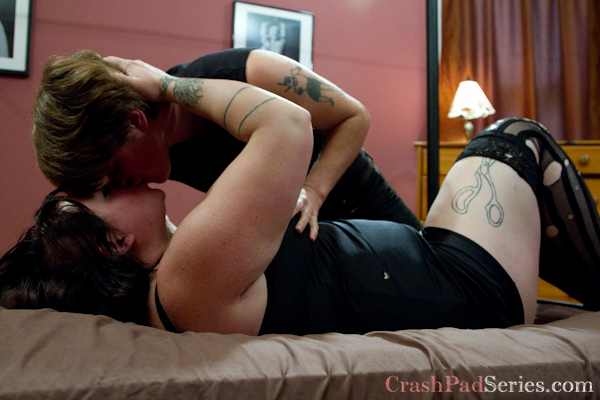 Turns out, Jesse is a natural. Topping comes to her like all the skills are downloaded right into her brain, like she is in a kinky version of The Matrix.

“Hey, want to try tying me down to the bed and fucking me until I scream for mercy?” Asher texts.

“Why yes, yes I do,” comes the reply immediately.

“How about blindfolding me?”

The quarter is almost over, and they walk through the Quad on the way to Psych together nearly every day. Asher whispers into Jesse’s ear. “Maybe I could wear those stockings you like, and you could slice them off of me with a knife—or better yet, rip them with your bare hands.” They’d stayed in bed late, fucking, exploring each other’s skin and taste and touch and eagerness. Jesse could still feel Asher’s pulse and breath and blood pressure synced up to her own.

She tries not to stumble and fall over. Fuck, this girl, this gorgeous creature, and she wants me to do all these fantastic filthy things to her? She feels drunk on gratitude. I Must’ve Done Something Good keeps getting stuck in her head.

“I have a surprise for you later. You’re still coming over after dinner, right?” Asher kisses Jesse’s neck as they approach the building.

“Mmhm, after my shift at the store,” Jesse closes her eyes and tilts her head to expose more of her neck. “Can’t wait,” she whispers, kissing Asher back and sliding her hands around her, along her trench coat. Asher may not be able to wear the fancy femme shoes she wanted to on Seattle’s rainy campus, but goddamn if she wouldn’t have femme rain gear. She even had a white umbrella with ruffles for particularly wet days. Jesse swoons.

“Fuck,” Jesse mutters, low and under her breath as Asher emerges from the bedroom in a tight white leather corset, white thigh-high fishnet stockings—the industrial ones with no finished top edge—held up by a simple white garter belt. Her panties, a blush shade of pink, were on top of the garter, a style she’d told Jesse is more British than American, and easier to remove while still keeping the rest of the outfit … intact. Her tits are pushed up and together, making her full figure nearly spill out of the top.

Jesse wants to climb inside her cleavage and snuggle and nuzzle for hours.
“Fuck,” she says again, sliding her arms around Asher’s waist as soon as she is within arm’s reach. “You look … goddamn.”

Asher giggles. “I like reducing you to expletives.” She reaches her arms around Jesse’s neck and switches her thighs, rubbing the stockings together and against Jesse’s jeans. Jesse feels so … clothed. She likes the strength she feels held up against Asher’s vulnerability. Asher kisses her, soft, their mouths at almost the exact same height, but only because Jesse is still wearing her boots.

“You brought the strap-on, right?”

Jesse can feel her body getting close. That swelling in her cunt, the way she tightens and tenses every muscle and tendon, legs getting sharp and straight, bending less and moving her body more as a unit, one strong, long piece.

She plunges her strap-on dick in and out. Asher writhes on her back underneath Jesse, legs splayed open, wrists still bound by the rope she’d run beneath the mattress, that cheap baby-blue blindfold with the JetBlue logo on it over her eyes. Her mouth is open, breathing hard, lips and tongue wet. Asher raises her hips to meet Jesse’s and with each thrust, some little gasps escape.

Jesse isn’t sure how long she can stand it. The wetness. The hole. Being inside Asher. The feeling of being enveloped and held, safe, contained. Jesse grips Asher’s hips and digs her knees into the mattress, mouth landing on Asher’s shoulder, sucking as she lets her hips follow that feeling there—just there—that one—that—

And with a few more thrusts, that’s it—she yells out, coming hard, shoving into Asher as she convulses and collapses on top of her.

Asher kisses the parts of Jesse that she can, her neck, her upper arm, letting Jesse move when she’s ready. Jesse reaches down to ease the strap-on slowly from inside Asher and only felt her own wetness. Fuck, what had happened? Her harness was loose and the dick sags … and probably hadn’t been actually inside of Asher for some time now.

“Was it—did this slip—aw, fuck.” Jesse blushes hard, fiddling with the dick, unsticking the leather harness from between her legs.

Asher can see out of one eye, the blindfold now askew. “It’s okay, Jesse—it was so hot to feel you come.”

Jesse starts undoing the rope bindings around Asher’s wrists. She’d pulled the knots tight and it took both hands to work them free. Her cheeks burned with embarrassment. “You could’ve told me!” Jesse whines a little.

“I guess. But I really didn’t want you to stop,” Asher’s voice was low and husky, playful.

“I’ve never … I think that was the first time I’ve been able to. Come, I mean. When strapped on.”

“Mmm, well I loved it. Let’s do it more, okay? I want to feel you filling me up next time.”

“Could you just … make sure to tell me? If it slips out. Maybe you could kind of, beg for it, like I’d slipped out on purpose to tease you?”

One thought on “Reduced to Expletives (Asher & Jesse #3)”