I’m really excited about the Best Lesbian Erotica reading that Amy & I are putting together! We picked up two big boxes of BLE from Cleis Press headquarters today and are almost completely ready for the big day.

Our lineup is incredible!

I’m working on getting someone to record video—I do have some leads, but if you are in the Bay Area and want a comp ticket to go in exchange for helping with video recording, let me know please. I would love that. I’m trying to get more videos of my work up online.

It’s an experiment, doing the release party with a kind of high cover price ($20 at the door) that includes the thing that the release party is for (a copy of Best Lesbian Erotica 2014). I’m not sure if that’s going to mean more people show up, or less, or people show up and want to donate instead of getting a book + ticket (which we’re allowing with our “no one turned away for lack of funds” policy). The general culture of book readings in New York and Seattle and (from what I can tell) San Francisco is that they should be free, and then that people will buy the book to support. But instead of that, we’re including some other goodies (like door prizes! And wine & snacks!) and making sure that everybody gets a book.

Here’s the details. I hope it’ll be an incredible turnout! I’ll be reading my story from the book, which also happens to be the lead (first) story, called “A Good Workout,” which is my first published butch/butch erotica piece.

It’s been interesting, changing my reputation and my perception to others as a “femme-oriented butch” to a faggot butch. I have pages and pages to say about that, but for now I just want to share that when I read this last year at an erotica reading, another butch who was reading after me stood up and declared, “I’m a REAL butch. I ONLY date femmes.”

I was kind of speechless and stunned. It was definitely for audience laughs, for impact, and to set her apart from me and my story, but it also kind of stung. Plus, ugh, I really don’t like anyone who uses the phrase “REAL ____” to try to describe how there is One True Way about just about anything, especially around gender.

I’ll write a bit more about that later, but for now, just know that I’ve got a controversial faggoty butch story (set in the locker room at a gym) and I’m looking forward to sharing it with you all in person. 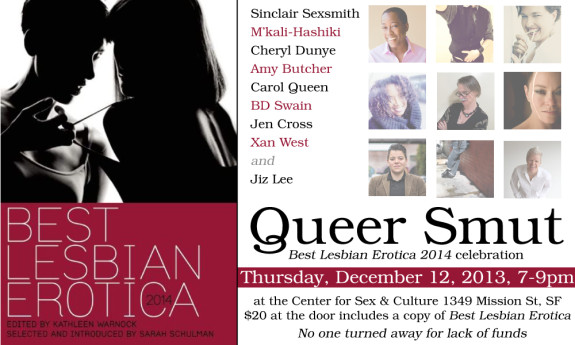 The holidays are upon us, and what better way to celebrate than with the brand spankin’ new Best Lesbian Erotica 2014 West Coast release party! Each year, the Best Lesbian Erotica series captures some of the best smut stories by well-known and brand-new authors. Come hear readings from 2014’s collection edited by Kathleen Warnock. Join us for an exciting reading from the new 2014 collection and beyond.

$20 at the door includes the price of a book!

Books will be for sale—bring $15 extra and get yours signed by the contributors. As Kathleen always says: buy one for Grandma! 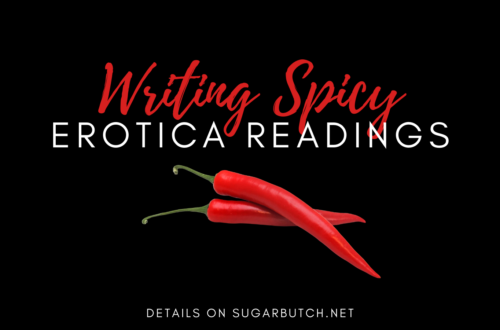