1. What insight about polyamory/open relationships would you share with your younger self?

To preface this, and my other answers here, I don’t think much of what I have to say is particular to polyamory. It’s about relationships, and it so happens that I’ve been doing polyamorous relationships since my very early twenties, so for nearly fifteen years now. But I’m pretty sure most of this would still apply if I were monogamous.

I’d tell my younger self that it’s okay to break up—that breaking up does not mean failure, and that there’s no bean-counter in the sky judging me if I haven’t tried absolutely every single possible thing to save a relationship. Deep joy is crucial. If a relationship drains you for a little while as you work through something difficult, fine. But if your experience is one of constant drain, pain or sadness, and there’s no realistic way that’ll change substantially in the foreseeable future, then it actually doesn’t matter how much you love someone, or how much they love you, or whose fault any of the bad stuff is. It’s okay to leave just because you’re unhappy. You have permission.

I’d also share a term I came up with just a few months ago: “terminal issue.” All relationships encounter challenges, right? Sometimes we don’t even register them as such because we deal with them so easily and quickly. Sometimes they take up space for quite some time, or are especially big and painful, but then we resolve them and they don’t come back. But sometimes they last, and last, and last; or they get worse over time; or they arrive in one fell swoop, but are so gigantic they stop us in our tracks. Eventually, those big or long-lasting issues, if they’re serious enough, are the ones that can lead to a split. Those are what I call terminal issues.

In my experience, the terminal issues are rarely about circumstance or outside events, though outside events can reveal or exacerbate them. They’re the ones that relate to deep-level incompatibility—the structural components of two people’s personalities, psyches and life philosophies that simply aren’t going to budge enough to accommodate one another and result in mutual joy. To wit, if I look back at my past relationship splits, the terminal issues are ones that would still be present today if I tried to get back together with the person, even many years later. Neither of us magically changed after a split. No amount of work would have made us fit better. I think that the more clearly I learn to discern workable issues from terminal issues, the more I understand how compatibility is crucial, and the less important it becomes to figure out who’s at fault when that compatibility is absent in a given area.

2. What has been the hardest thing about navigating multiple relationships, and how have you overcome that?

It’s been challenging to understand the difference between poly as a value system and poly as a concrete practice. For me, they go so closely together that I make no separation, but I’ve learned that for many people this is not the case, and it’s been a painful lesson. For some people, poly is a value that may or may not translate into practice for any number of circumstantial reasons (health, time, emotional readiness, etc.). For some, it’s a practice that may not relate to a value system; it’s simply helping them meet a need (sex, closeness, whatever) at the moment. Neither one is inherently better, but they do lead to two very different ranges of assumptions, some of which may clash. I am definitely better off being involved with other people who, like me, hold polyamory as a core value or a key element of their identity. I was devastated once, for instance, by a lover who took for granted that if she got seriously involved with someone, we’d split up (I didn’t know this). So when she announced she’d found a partner, for her that was a breakup conversation, but I was just happy for her and still looking forward to our next play date. To her it was obvious: a real relationship meant no more playing around with me. To me it wasn’t obvious at all—after all, we were playing around even though I was in two serious relationships myself! Clearing that one up was pretty ouchy. Definitely it taught me to ask more questions about value systems from the get-go.

3. What has been the best thing about being open/poly?

It’s allowed me to live by my ethics rather than accept the ones that were fed to me as a child. Full honesty, not just honesty about the stuff you’re supposed to think and feel and want, and denial about the rest. Real, vibrant, living desire, not duty. Deep, gentle commitment to everyday relationship quality, with longevity as a by-product, rather than a gritty commitment to stay together til death do us part while ignoring the daily cultivation of intimacy. Poly has also allowed me to co-create the kind of family I deeply value, with long-term partners, metamours and friends who are, frankly, amazing people.

I learned the word “idiolect” the other day, and I think it’s a really handy one. It’s a linguistics term that essentially means each person’s totally unique, individual way of speaking a given language. I think the concept can apply to emotions, too.

Think about the experience of physical pain. It can be very real and intense for the person experiencing it, but anybody looking on can only ever understand it from the way it manifests. If different people are experiencing identical pain, one might scream and cry, the second might grit their teeth and be stoic, the third might giggle and make light of it, the fourth might faint, the fifth might get angry and kick the wall. They’re all legit pain responses, but an onlooker might have a very different read on what’s actually going on in each situation.

The same is true for most inner experiences. The way each person expresses, for instance, respect, care, desire or anger is all just their individual manifestation of what’s going on inside. Figuring this out means it’s become easier for me to ask questions about the inner experience instead of interpreting it all from the outward manifestation and reacting only to that. Questions like, “What does X mean to you?” “What is your reasoning behind Y?” “What is your intent when you say or do Z?” “When you act in this way, what’s going on inside you?” When I start to understand how their emotional idiolect works, I have an easier time immediately “hearing” what they’re “saying.”

So, for instance…
Manifestation: Partner is unfocused and keeps changing the subject.
Interpretation: If I were doing this, it would be a sign I probably wasn’t too interested in the conversation, or had a big issue on my mind.
Question: You seem distracted. What’s going on with you right now?
Inner experience: This means they have low blood sugar, not that they don’t care what I’m saying.
Solution: Feed them now, talk later.

I find that if I remove the focus on the outward expression and look to the inner experience instead, it’s relatively easy to empathize with my partners or explain what’s going on with me. From there, if someone’s outward manifestation is a problem, it’s much easier to tweak, since it’s not loaded with the added emotional weight of misinterpretation. 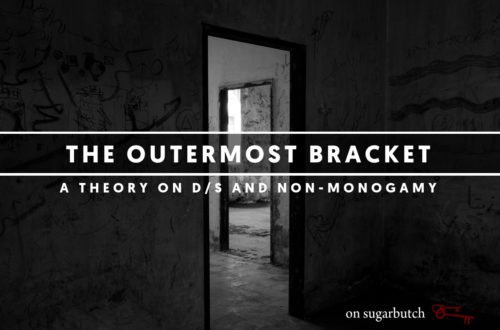 3 thoughts on “Open Relationship Mini Interview with Andrea Zanin: Applies to All Relationships, Not Just Poly”