You are invited to … A night of DIRTY QUEER SEX!

Titus Androgynous is a performer, writer and, when time permits, boxer. A contributor to the queer fashion blog, DapperQ, she began writing as a way to explore her emerging dapper-butch aesthetic. She is fresh from an acclaimed gender-bent production of Henry V, and can’t wait to tease you all with some salacious prose.

S. Bear Bergman (www.sbearbergman.com) is an author, a theater artist, an instigator, a gender-jammer, and a good example of what happens when you overeducate a contrarian. He is also the author or editor of three books for grown-ups, two books for kids, four award-winning solo performances, assorted contributions to anthologies on all manner of topics from the sacred to the extremely profane. A longtime activist, Bear continues to work at the points of intersection between and among gender, sexuality, and culture, and spends a lot of time trying to discourage people from installing traffic signals there. 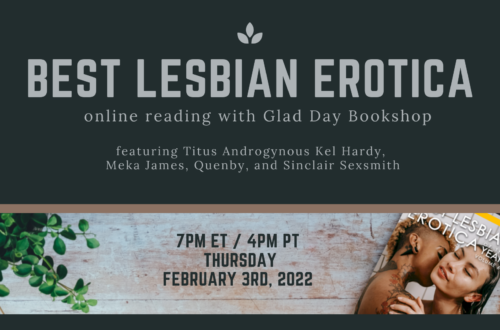