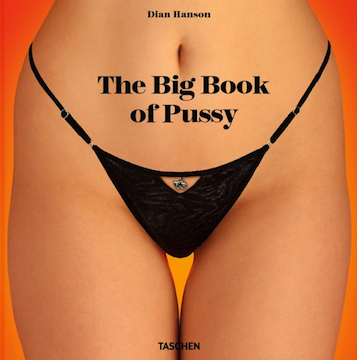 I returned home from the (very long and amazing) two week trip out west to this book waiting on my desk. I love that shit like this shows up at my house. (Today I got a box full of cocks with HITACHI in huge letters printed on the side of it—more on that soon.)

My job is rad.

This book piqued my interest because Buck Angel on his Twitter stream (the exact tweet I can’t find, but it was probably a month ago) mentioned that he’s featured in it, and I was curious. His interview is in the last chapter, the 2000-2011 decade, and he’s featured in a wig and heavy makeup and fishnets, goatee covered in all of the photos except one. Still, the accompanying text makes it clear who he is, and the interview is pretty good.

Editor Dian Hanson delves into the historical significance of this humble os, to show how the yoni has been coveted, feared, reviled, and worshipped by civilizations worldwide, from New Guinea to old Ireland. The text is supported by playful photographs of women exposing their vulvas, from 1900 to the present day. Because depiction of this body part has long been wrapped in unwarranted shame, The Big Book of Pussy reframes the subject, featuring models who expose their most private part enthusiastically, happily, with smiles spread wide as… well, you get the picture. And with 400+ photos the point is made emphatically, in images both naturally furry and stylishly groomed.

Worth flipping through the next time you’re at Good Vibes or Babeland or whichever local bookstore might be carrying such a thing. Or in my living room, if you ever come over, since I can’t imagine a better thing to leave on my coffee table.

The Big Book of Pussy was sent to me by Taschen Books. Pick it up at your favorite local independent bookstore, or if you must on Amazon. Thanks Taschen!

2 thoughts on “Review: The Big Book of Pussy”