And it’s going to be delicious. I can tell already. Mark your calendars! And see the whole schedule over on queerliterarycarnival.com. 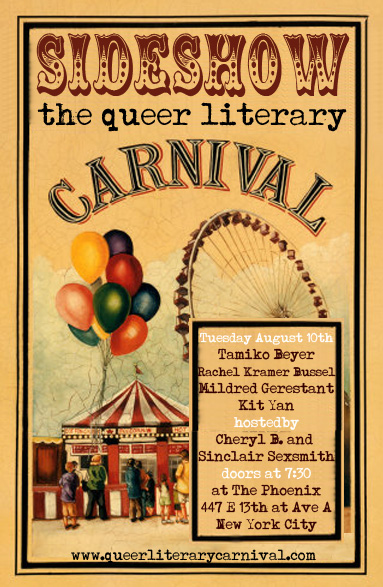 Tamiko Beyer’s poetry has appeared The Collagist, Sonora Review, OCHO, Copper Nickel, and elsewhere. She is a founding member of Agent 409: a queer, multi-racial writing collective in New York City, the poetry editor of Drunken Boat, and on the Advisory Board of the New York Writers Coalition. She is currently working on her M.F.A. thesis – a collection of eco::queer poems. She hopes to find some teaching work, soon. Find her online at wonderinghome.com and blogging at kenyonreview.org.

Rachel Kramer Bussel (RachelKramerBussel.com) is the editor of over 30 anthologies, including Fast Girls, Please, Sir, Please Ma’am, Bottoms Up, Spanked, The Mile High Club, Do Not Disturb, He’s on Top, She’s on Top, Tasting Him, Tasting Her, Crossdressing, Dirty Girls, and is Best Sex Writing Series Editor. She is Senior Editor at Penthouse Variations, a sex columnist for SexisMagazine.com and has hosted and curated In The Flesh Reading Series in New York since October 2005. Her writing has been published in over 100 anthologies, including Susie Bright’s X: The Erotic Treasury, Best American Erotica 2004 and 2006, and Zane’s Purple Panties and the New York Times bestseller Succulent: Chocolate Flava II. She has written for Cosmopolitan, The Daily Beast, Fresh Yarn, Mediabistro, Newsday, New York Post, Penthouse, Time Out New York, Zink and other publications

MilDred has performed everywhere, from college campuses including NYU, Penn State, Vassar, MIT, NYU, Amherst, and Smith College; to theaters such as Lincoln Center, and Henry Street Settlement. Cameos of her performance have been featured on HBO, MTV, and Oxygen television. She also appeared in the award-winning film “Venus Boyz.” MilDred was featured on Go Magazine’s “100 Women We Love”- Class of 2009 List, along with Ellen DeGeneres and Wanda Sykes. She was also awarded the 2009 Spirit Award, from OUTMusic, for 14 years of dedicated service through her acting & performing. MilDred also received Go Magazine’s 2010 Readers’ Choice Nightlife Awards for Best Spoken Word Performer! MilDred has been featured in over 8 books including: Female Masculinity; Assume Nothing; Long Live the King: A Genealogy of Performative Genders; Social Justice: A Journal of Crime, Conflict, and World Order; and Cast Out: Queer Lives In The Theater. MilDred is also a Yoga teacher, Reiki Practitioner, and Thai Yoga (Bodywork) Practitioner and is available for one on one sessions. DredLove.com

Recently Featured in the HBO Documentary Asians Aloud, Kit Yan tell stories through slam poetry from the lens of a transgender Asian American from Hawaii now lost in the big city of New York. Through touching love poems, dirty sex accounts(optional), and comedic tales of his childhood –Kit takes you on a journey that is raw, real, heart-wrenching, and unforgettable. New York Magazine describes his art as “knockout spoken-word” while Curve magazine says “incredible slam poetry” and Bitch magazine states that: “The eloquence of Kit’s spoken-word delivery lies in the anti-racist, anti-homophobic, gender-inclusive, language that ties his lyrics together.” Kit’s work has been taught at universities coast to coast, from San Francisco State to Harvard. He spoke to over 200,000 from the stage of the 2009 National Equality March, performed on the San Francisco Pride main stage, and earned a spot in as a top three finalist at the National Queer Slam. Kit Yan is the reigning Mr. Transman 2010, the first person to ever hold this national title.

Sinclair Sexsmith runs the award-winning personal online writing project Sugarbutch Chronicles: The Sex, Gender, and Relationship Adventures of a Kinky Queer Butch Top at sugarbutch.net. With work published in various anthologies, including the Best Lesbian Erotica series, Sometimes She Lets Me: Butch/Femme Erotica, and Visible: A Femmethology volume 2, Mr. Sexsmith enjoys whiskey, topping, the serial comma, political activism, and has been known to get on her knees in order to fix the strappy sandals of a queer femme.