Hey! Guess what! It’s that time again, folks: the July SIDESHOW is just around the corner.

This time, we’ve got an amazing selection of poets, performers, and writers, and we’re going to be flying our freak flags high in honor of the flag day that is the American independence day. This is our kind of national pride, I suppose: freaky and queer and feisty and loud-mouthed, and proud of it.

Come out for a great night of performers and readings in New York City! 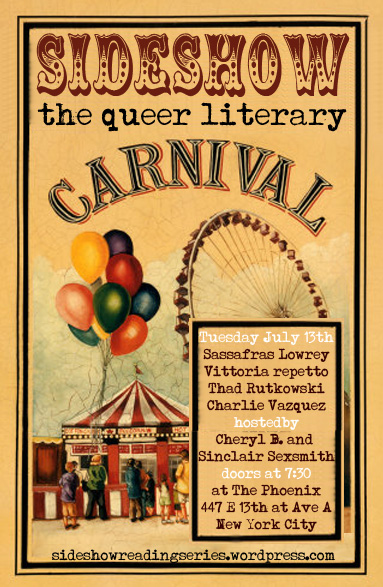 Sassafras Lowrey is an international award winning author, artist and storyteller. Ze is a genderqueer identified high femme with a complicated gender history.  Sassafras is the editor of the ‘Kicked Out’ anthology which brought together the voices of current and former homeless LGBTQ youth, and hir stories have been published in numerous anthologies including: Visible: a Femmethology, Gendered Hearts, Gender Outlaws: The Next Generations.  Ze teaches storytelling workshops at colleges, conferences, and community centers across the country. You can learn more about Sassafras online at www.PoMoFreakshow.com

Vittoria repetto has been published in numerous magazines and anthologies such as Mudfish, Voices in Italian Americana, Rattle, Lips, The Paterson Literary Review, Italian Americana, Unsettling American: An Anthology of Contemporary Multicultural Poetry, Identity Lessons: Learning American Style, The Milk of Almonds: Italian American Women Writers on Food & Culture among others. In 1995, she published a chapbook entitled Head For the Van Wyck (Monkey Cat Press) and in 2006, Guernica Editions published her first full length poetry book, Not Just A Personal Ad; one of her reviewers noted “Poems of intense sensibility and gorgeous imagery are a rarity these days; but this book of verse by a distinctly working class, distinctly lesbian, and distinctly Italian American voice is a must for all readers of good poetry.” Vittoria repetto is the vice president of the Italian American Writers Association (IAWA) and the editor of the monthly newsletter. She has been hosting the Women’s & Trans’ Poetry Jam at Bluestockings Bookstore since its opening in 1999.

Thaddeus Rutkowski is the author of two innovative novels and has read his work widely–recently in Hong Kong, Paris and Budapest. He is a one-time winner of the Nuyorican Friday slam, the Poetry vs. Comedy slam, and the Syracuse slam. He teaches fiction writing at the Writer’s Voice of the West Side YMCA and world literature at City University.

Charlie Vázquez is a radical writer of Cuban and Puerto Rican descent. His fiction and essays have been published in anthologies such as Queer and Catholic (Taylor & Francis, 2007) and Best Gay Love Stories: NYC (Alyson, 2006). His writing has also appeared in print and online publications such as The Advocate, Chelsea Clinton News, New York Press, and Ganymede Journal. Charlie hosts a queer monthly reading series called PANIC! at Nowhere in the East Village, which focuses on original fiction and poetry. He’s a former contributor to the Village Voice’s Naked City blog and a retired experimental musician and photographer. His second novel Contraband was published by Rebel Satori Press in April 2010, and his third, Corazón, is wrapping up for future publication.