The Lambda Literary Award nominees were announced today, and as usual I’m making a checklist of ones I’ve read, ones I’d like to read, and the ones I think will win be finalists. And, as usual, the only transgender content is in the specific “Transgender” category, though the “Bisexual” category has split into fiction and non-fiction because, it seems, there are finally enough nominees to warrant it. Are there really that few books on trans and bisexual issues? Puzzling. Overall this year, there are 112 finalists in 23 categories. I’m sure there’s got to be a book or two or five in there that you’d love to read. Check it out. 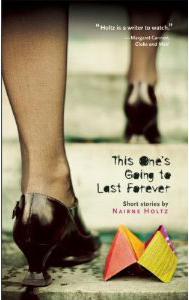 Special congratulations to Nairne Holtz, whose book This One’s Going to Last Forever (Insomniac Press) was nominated in the Lesbian Fiction category. Holtz has a short story called “Bait and Switch” in Best Lesbian Erotica 2009, an anthology in which I also have a story, and when we were both in New York City at the end of 2009 for the annual Best Lesbian Erotica reading at the Drunken! Careening! Writers! reading series at KGB bar, hosted by Kathleen Warnock (who is coming to read at the very first Sideshow!), and I have had a chance to read This One’s Going to Last Forever. It is a collection of short stories and a novella. Here’s the description:

This One’s Going to Last Forever reflects both the naive optimism of those who have yet to learn about love and the cynicism of those who feel that by now they should know better.

Clara, a university student working at the McGill Daily, discovers that in love and politics, commitment is often more imagined than real. Kelly and Sonya share a bond that has less to do with love than with their dependence on each other and a succession of friends who supply them with heroin. A middle-aged man who performs drive-through weddings dressed as Elvis realizes, as he marries his first same-sex couple, that the only domestic partner he is ever likely to have is his ailing father. But when he ends his latest relationship, an unlikely friendship results.

The characters in these darkly comic stories and novella may be searching for love in all the wrong places, but they are also able to find love in the most unexpected places.

The Lambda Literary Foundation recently relaunched their website and it’s quite spiffy, by the way.