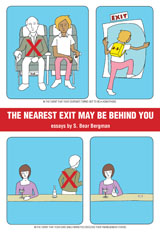 S. Bear Bergman has a new book out, The Nearest Exit May Be Behind You, which is a collection of personal essays, mostly on gender. And to celebrate, Sugarbutch is helping to kick off a virtual book tour! Thanks, Bear! Thanks, Arsenal Pulp Press!

Bear also wrote the book of gender essays Butch Is A Noun, which I’ve mentioned on this site more than a few times. It is one of the only books written about butch identity in the last ten years so it’s certainly influential to my work and philosophies on gender in general. There are some clips and excerpts from Butch Is A Noun available online and I highly recommend them. That first essay, “I Know What Butch Is,” I quote from often and go back to frequently, I just love Bear’s writing and style in that piece.

When I published Top Hot Butches in the Spring earlier this year, Bear was listed as #48 and was one of the factors of me including trans men in the list of butches in the first place. If I excluded trans men, I would have to exclude Bear, and Bear wrote pretty much the only book on butches in the last ten years – did that make sense? Not really. I thought it was extremely important to include Bear, specifically, which opened up the door to include other trans men as well. Of course, not all trans men identify as butch, but at the time I didn’t think I could include some trans men and not others … and the inclusion was problematic. I do not want to start hashing through that here, this is about Bear’s work, after all, but I really appreciated Bear’s supportive emails and contact around the list and that controversy.

Lots has happened for Bear since the publication of Butch Is A Noun. Ze addresses this right away, in the second essay: whereas during the first book, ze was for the most part perceived as a dyke, partnered with a woman, and lived in the suburbs, and now Bear is pretty much perceived as a fag, partnered with a guy, and living in a fairly big city. This transition from “suburban-dyke-me” to “city-fag-me” seems to have altered Bear’s relationship with masculinity a bit, and many of the essays in The Nearest Exit May Be Behind You address this unpacking of masculinity, tracing it back through history and family (I especially liked the discussions of masculinity through the lens of Judaism and his particular family experience of ‘being a man’), and discussing what it means in some new life contexts.

Alternately unsettling and affirming, devastating and delicious, The Nearest Exit May Be Behind You, is a new collection of essays on gender and identity by S. Bear Bergman that is irrevocably honest and endlessly illuminating. With humour and grace, these essays deal with issues from women’s spaces to the old boys’ network, from gay male bathhouses to lesbian potlucks, from being a child to preparing to have one; throughout, S. Bear Bergman shows us there are things you learn when you’re visibly different from those around you―whether it’s being transgressively gendered or readably queer. As a transmasculine person, Bergman keeps readers breathless and rapt in the freakshow tent long after the midway has gone dark, when the good hooch gets passed around and the best stories get told. Ze offers unique perspectives on issues that challenge, complicate, and confound the “official stories” about how gender and sexuality work.

I’m still working my way through the book, I haven’t finished it yet, partly because I’m savoring it. I could zip through it a bit faster than I am, but I really appreciate Bear’s perspectives on all of this and I love having access to someone’s inner thoughts about gender, masculinity, queerness, transitioning, love, life … all of those little things, ya know. Sometimes it feels like my own mind eloquently written down, sometimes the concepts are a bit foreign and I have to stop and go over it again. I don’t agree with everything, and there’s some tension between butch and trans here that I am finding fascinating and particularly hard sometimes, but I am so grateful for Bear’s work.

Aside from the virtual book tour, Bear is on an actual book tour, too! Check out the schedule on sbearbergman.com for dates and appearances in Columbus, New York, San Francisco, Seattle, Vancouver, & more.

Pick up The Nearest Exit May Be Behind You, Essays by S. Bear Bergman from Arsenal Pulp Press, or from your local independent (feminist, queer, radical) bookstore.

3 thoughts on “The Nearest Exit May Be Behind You by S. Bear Bergman”