But: it was made in 2000. And I was OBSESSED with it in 2001. So when Babeland offered it up, I jumped, but wondered nervously: would it hold up? Would it be outdated?

What’s that? “Who are Shar & Jackie?” Oh, right. I talk about them both on a first-name basis as if I know them, but really I don’t. (I did meet Shar once though. She asked me if I was packing. I was. It was hot, and I blushed hard. Did I ever write that story up on Sugarbutch?) They are a queer butch/femme couple, Shar Rednour and Jackie Strano, who I’ve known of since their porn company, S.I.R. Productions, put out both this film and others (such as Sugar High Glitter City – full review of that one coming soon too). I was obsessed with On Our Backs, too, and I vaguely remember them being featured in there at least once or twice. They were a high-profile visibly queer butch/femme couple when I was a babydyke, and I saw them as mentors and roll models, even if I didn’t actually know them.

They’ve now been together 16 years. There was a great article in the The SF Chronicle recently about them and their three kids, which mentioned Sharlene’s Babycakes. 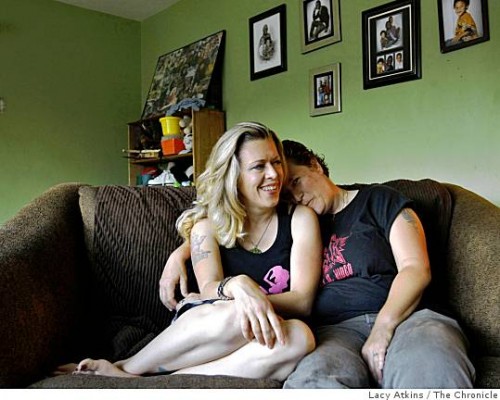 (Photo reprinted without permission from The SF Chronicle)
Okay, back to the review:

I admire the attempt by S.I.R. productions (which apparently stands for Sex, Indulgence, and Rock ‘n’ Roll) to put together a story, but also find it generally unnecessary, and sometimes distracting. 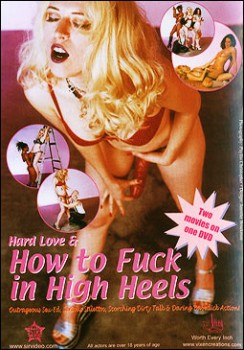 I was thrilled by it when I popped in the DVD and saw the familiar opening scene. You know how some movies are just forever embedded in your consciousness? Yeah, this one is. I studied the sex scenes with Jackie, though I wasn’t certain wy she fascinated me so much. Did I want to do her or be her?

I love the scene when the femme is getting fucked in the kitchen. I love the scene where Jackie’s ex meets up with her boi and does a striptease. I love watching Jackie jerk off while her lover eggs her on with dirty talk. I love Jackie’s enthusiastic jump into the tub to be with her, later.

Eventually, Kristen and I did sit down to watch it, and her reaction was much as I suspected. We didn’t make it through the first scene, but I insisted we forward it to the dirty talk/jerk off session. “Don’t you want to watch Jackie come?” I enticed, knowing how much she appreciates a butch orgasm. She watched with interest, lips parted. I watched her. Then she insisted we turn it off and go fuck.

You should buy Hard Love and How to Fuck in High Heels at Babeland.