… but you probably already know this. There is SO MUCH I want to post and write about to encourage activism, voting, political awareness. 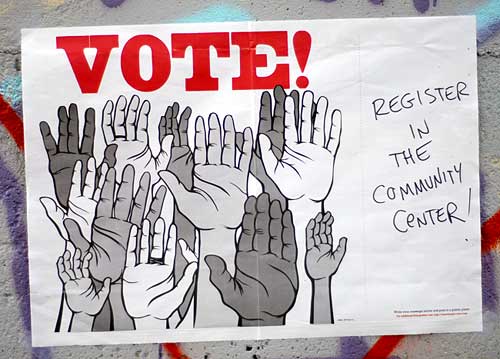 Free VOTE! poster from Nikki McClure, one of my favorite artists, at BuyOlympia.com.

Another campaign against Proposition 8 is keeping running list of all the upcoming No on 8 rallies, events and actions http://www.myspace.com/noonh8 and has signs, buttons and more at our not-for-profit CafePress page www.noonh8.org.

This week you have lashed out against the “Feminist Left.” I understand your frustration. You see that women are not flocking to the McCain/Palin ticket and you don’t understand why. Allow me to illuminate you.

The truth is, Senator McCain, your candidacy is the worst for women in recent history. You thought that women would vote for you once you put a woman on your ticket. But women aren’t fooled by this tactic. Women, Senator McCain, vote on issues important to us, not on whether or not the candidate wears a skirt.

The problem, Senator McCain, is your voting record, platform, and policies. You have consistently voted wrong on issues that directly impact American women’s bank accounts, personal liberties and health.

Read the rest of the article at HuffPost, visit feministsforobama.org and the Feminist Majority blog (check out the twitter responses for “Why are you voting for Obama?” – great).

Amazing photo essay of Obama by journalist Callie Shell … I can’t stop going over and over the photographs. Some of the quotes make me teary: Several days before the primary, my cab driver told me he was going to vote for Obama but he didn’t believe a black man could win against a white man or woman. I called him after the election to see if he voted. With pride in his voice he said, “I did and I took my kid with me and the next day I told him he was right. He could be anything he wanted to be someday, even President.” (via Kottke)

One thought on “I’m going election-crazy”