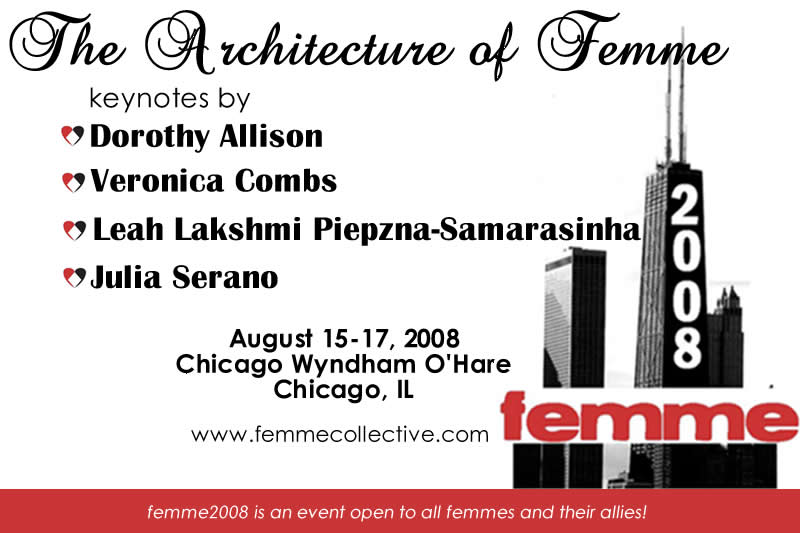 The Femme Conference 2008, taking place in Chicago in August, is put on by the Femme Collective. Take a look at their mission statement: Femme Collective is committed to creating conferences by Femmes, about Femmes, and for Femmes and their allies. We understand that Femme is more complex than just being a queer person who is feminine; it is a part of how we interact with and shape our world as queer academics, activists, artists, homemakers, parents, professionals, students, teachers, etc.

I really hope to attend the conference … we’ll see if I can make that happen. More information at femmecollective.com.

Queer Femmes from all over the Globe to Gather for Conference
Femme 2008: The Architecture of Femme will take place August 15th-17th in Chicago

(CHICAGO, IL – JUNE 12, 2008) The Femme Collective proudly presents “Femme2008: The Architecture of Femme,” an international conference celebrating queer femininities August 15th through August 17th 2008 at the Chicago Wyndham O’Hare: 6810 N. Mannheim Rd. near O’Hare International Airport. The conference will feature three full days of programming, including keynotes, workshops, panels, performances and even a film festival. Regular registration is $75 through July 15th, 2008 and then registration will go up to $95 for late registration, which is open through the conference. Registration covers all of the conference events and can be made by going to www.femmecollective.com.

Queer femininity is a topic that is growing in relevance and popularity. Queer femmes are the subject of internationally known queer photographer Del LaGrace Volcano and author Ulrika Dahl’s recently released book, Femmes of Power, which pays homage to queer femininities and femme-inist political activism in queer communities. Dahl will be at the conference with many of the femmes featured in the book to discuss femme activism from an international perspective.

“This is an exciting opportunity for femmes and allies to come together and build community,” said Katie Spencer, Media Committee Chair. “Femmes are positioned uniquely within the culture to speak to issues of patriarchy and oppression and the Femme Conference will be an opportunity to dialogue about these issues and other topics.”

Femme 2008 is an event not to be missed and the Femme Collective looks forward to hosting what is sure to be an amazing, life-changing event for queer femmes and their allies. 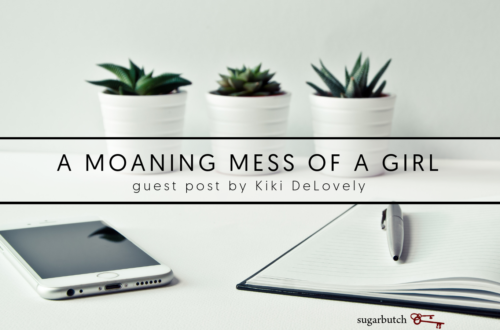