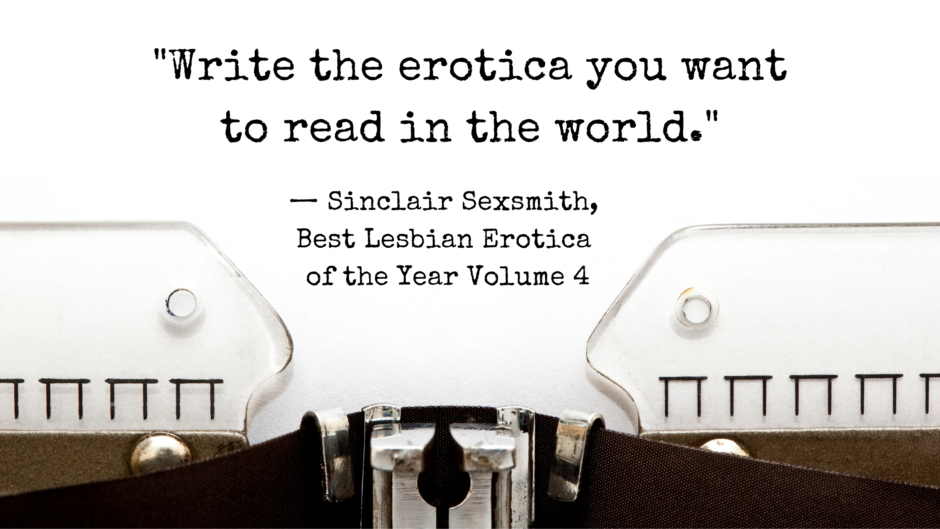 Reading and writing erotica can be an act of rebellion.

Even though erotica is pretty mainstream, in a lot of ways, it still has a reputation as a bit “naughty,” and there are plenty of people who wouldn’t share the kind of spicy books that they frequently consume with their coworkers or their family.

There’s a reason sales of erotica grew significantly when ebook readers became more accessible! People could much more easily hide the book they were reading and still read it in public — on the bus, on the subway, on the airplane, on their commute. The privacy helped introduce the genre to many people who had never read it before.

We were not taught about sex as a pleasurable act.

We were not taught about being in our bodies as something exciting, personal, pleasurable, fun.

When we read (and write!) erotica, we take a little bit of that shame away. We claim our birthright of pleasure, as a being in this corporeal body. We stake our right to desire freely, to fantasize, to ponder what would feel amazing to us (or to our characters).

Yes, sure, look — it can be just pure escapist drivel, too. All good art is allowed to have its escapist, check-out, dissociative, frivolous forms. It can reinforce gender norms and compulsive heterosexuality, it can reproduce all kinds of societal hierarchies and eroticize things like money (ever heard of “bil-dom” erotica? Thing 50 Shades, and you’ll understand that it’s a sub-genre within the erotica/romance world). There are plenty of critiques of the genre, and of any given book. So of course, it’s not perfect. Don’t get me wrong.

But it can also be radical.

The erotica I love is gender affirming. It includes trans characters, nonbinary characters. And it doesn’t just include the skinny white masc versions of those identities, either — it includes complex, multifaceted characters who are celebrating their own sexual desires, wants, surrenders, and powers. Sometimes it includes struggles, like body dysmorphia and body dysphoria. Sometimes it includes kink and sex acts that really show how that character is seen, really seen, by other characters.

Sometimes, it can even show a reader what it’s like to be inside of a gender identity that is comfortable, that fits, that makes them shine. Maybe a story opens up a possibility that the reader hadn’t considered before. The reader is invited to have that kind of relationship with their gender, too.

The erotica I love normalizes the mess that is human bodies, that is genitals, that is our fragile, resilient hearts.

(Yes, you all who are reading this, you had a part in that, just by reading this site and my work here over the years. Thank you.)

Writing about sex, bodies, gender, desires, kinks is absolutely not the only way to heal shame — there are so many. But for me, it’s been an incredibly powerful tool. As someone who is historically marginalized in multiple ways, there is still not enough representation of my own particular proclivities — not in the same way that cis (affluent, white) lesbians, or hetero relationships, or vanilla folks are represented.

When we go into community and do some of the shame work around sexuality, gender, and bodies, we have the possibility of transforming that work not only for ourselves, but for our communities, too.

That’s why I keep saying, “Write the erotica you want to read in the world.” It can be transformative — not just for you, but for your relationships, for your communities, for the world.