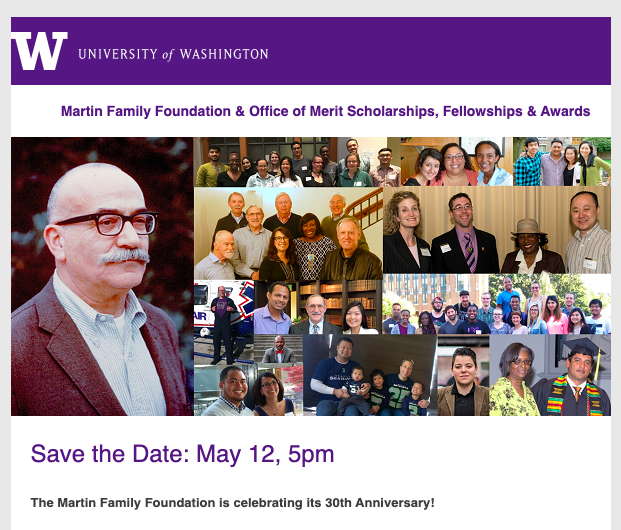 Twenty years ago, in 2000, the Martin Family Foundation changed my life by giving me a full academic scholarship to the University of Washington.

I was 20. I’d cut my hair off the year before, split up with my high school boyfriend, and was now figuring out what it was to be out and loud and really really queer. I was struggling to afford community college and rent, and while I did have some support from my family, I was also an emancipated minor and had been living on my own for 3 years at that point.

I remember filling out the application. I remember, on the day of the interview, I missed my bus by mere moments and went to the pay phone outside of Pagliacci pizza to call the school and let them know I was going to be late. I was sure I had no chance of receiving the scholarship, based on being late, but they said no problem and switched my time slot with the person after me (who was early). (I think of this often when I’m late, the lesson being: just let them know.)

I blazed in to the interview, at a table full of silver-haired white men, a few of whom were taking notes on laptops (it was 2000, that was uncommon), and I talked about how I wanted to make queer art and write about liberational stories of sex and desire and the transformative potential for feminism to change the world.

When I left, I thought, well, there’s no way that room will give me money for my mission. But I was proud of myself for telling them what I really thought, what I really wanted to study — it was very vulnerable, to be so honest about something that felt so radical.

I remember that much more than I remember getting the call that I’d been accepted.

It meant so much to me that the Martin family heard my young adult queer ambitious heart and said, yes; not only do we believe in what you’re trying to do, we’d like to give you money so you can do that. It still means so much to me.

I never thought I would actually be a professional sexuality, gender, relationships, and kink writer — I didn’t expect to use my women, gender, sexuality studies degree so directly. (I just thought I’d be able to articulate the sexism & homophobia in whatever publishing company I worked at very well.)

In so many ways, my career started with this moment, when this group of men said yes. It gave me the opportunity to believe in myself a little stronger, a little more vigilantly. Someone else listened and said *yes, I’d like to give you money so you can do that* and they did, and I can honestly say it changed my life.

Happy 30th Anniversary, Martin Family Foundation. thank you for all you have done for me and for others at UW & beyond.