Before I get started with my answers, for context, I live with my fiance, boyfriend, girlfriend, and metamour, most of whom have relationships outside our family, although I currently do not. The five of us are in this for the long haul and intend to spend the rest of our lives together, although that was not initially the plan.

I wish I had realised how many assumptions I was making. When I negotiated opening my relationship, I was dating my fiance. Then I fell in love with a married man, who I knew was in an open relationship. I made a number of assumptions about what it meant to be married and open (that we were allowed sex but not feelings, that his wife would always take priority over me, that I had the right to sleep with him, but not the right to hang out and watch movies with him, that I couldn’t ever call him and ask if he was free because I’d be intruding on time I assumed he was spending with his wife and she would get irritated and end our relationship, that our relationship could never be anything long term, because he and his wife did want to settle down to monogamy at some point) which were all completely untrue.

At some point, the word ‘polyamorous’ was mentioned instead of ‘open relationship’ and I looked it up and realised that the model I’d been basing my assumptions on might not be true and I should probably check. (I’d spent three months trying to pretend unsuccessfully that I wasn’t in love with him at that point.) Not a one of them turned out to be true. Funny, that.

I wish I’d realised that signing up for a relationship includes signing up for me when I have inconvenient feelings, instead of just when I’m at my best. I tried to ‘protect’ my other partners from that for a while. Big mistake!

I wish I’d realised that if I wanted to know how my boyfriend and his wife thought about a topic, I had to ask them both, instead of asking him and assuming I was getting the ‘party line’, so to speak. Had I just had the nerve to speak to his wife, all of these misunderstandings would have been cleared up in half an hour and I’d have fallen in love with her sooner.

I also wish I had been less impatient with my fiance. It wasn’t until two years later where he found someone he liked and was in a relationship with, as opposed to casual sex and I suddenly realised how hard I had pushed him in the beginning, how little time I gave him to adapt, because I was in the New and Shiny time and I didn’t realise what I was doing. I have come to a new appreciation of how well he was dealing back then.

For me, personally, it’s letting other people in. I have recurrent depression and gender dysphoria, so it’s really important for me to be able to say to my loves “I can’t stop thinking X terrible thing about myself, even though I know it isn’t true. Can I have a hug and some reassurance, please?” It’s one of my methods of coping, but it makes me feel incredibly vulnerable.

I’ve been with my fiance longer than my boyfriend and girlfriend, so it’s easier to talk to him than it is the others, because I’ve had more practice.

Letting more people in, past the defences I put up, feels intensely vulnerable. The only way to overcome it is to keep trying, hour by hour, day by day. I remember a quote from Neil Gaiman that summed my strategy up in a nutshell. He was talking about making art, but I think it applies to an awful lot of polyamory, too. “The moment that you feel that, just possibly, you’re walking down the street naked, exposing too much of your heart and your mind and what exists on the inside, showing too much of yourself- that’s the moment you may be starting to get it right.”

Jealousy is kinda horrible for everyone and while it comes up more and more infrequently as we get better at navigating it, it so often blindsides us. I have a horrid tendency to compare myself to my metamours and think “If they’re dating this person, it must be X quality that I don’t possess that attracts them! Oh no, I must cultivate a more femme gender expression/a love of knitting/the ability to not be squicked by certain sexual acts/a more dominant-than-thou aura of command for kinky fun times/the ability to not be bored to tears by ice hockey!” It is utterly ridiculous.

I’m finding that because I tried to protect my loves from my feelings for so long, I’ve got a backlog of stuff to work through with them, now I finally feel secure about our long term future. They didn’t even know that I was doing that! The moral here, ladies and gents: do not bottle up your feelings. Lesson learned.

Emotional freedom. Hands down. When I was monogamous, I always said I would be more upset if my partners fell in love with someone else, than if they slept with them. (With the caveat of “and didn’t tell me about it”, this is still true.)

As a result of that feeling, I felt that the most important thing I could do to show fidelity was never be more than casual friends with someone I was attracted to. This is a problem when you consider that I have a large number of incredibly attractive friends, both in terms of looks and personality. At the start of monogamous relationships, I used to have to explain to partners that I expected them to make exceptions to this rule for my two best friends. (It worked really well, until I fell in love with one of my aforementioned best friends.)

I realise this is not how everyone does monogamy, but it’s how monogamy was drummed into my head. I tried for a long time to change my definition of monogamy, but it only led to a nagging feeling that I was doing it wrong somehow. It wasn’t til I left it behind entirely that I realised how much it’d stifled me.

Now, I don’t have to have designated best friends who are exceptions to this rule. An example- one of my closer friends is, somewhat unusually for our crowd, entirely monogamous (and does not do monogamy the unhealthy way I used to) and our friendship can just be what it is, as deep as it is, with as much love as there is, instead of me having to force it into the shallows for the sake of his marriage or my relationships. And that applies to every single person in my life, too.

I may have gotten into poly because there was a cute boy I wanted to sleep with, but this, this right here, is why I’ve signed up for lifelong poly.

There will be people reading this thinking “This is all well and good, but can it work in the long term?” because they want it, but they’re scared of trying, scared of messing up or because the way they want to do poly looks different from the way people on the internet do it.

Please, oh faceless denizens of the internet, have faith in yourself and try. I don’t know of another poly family the size of mine who live under one roof anywhere in the world. The five of us still bought a house and intend to still be in it when we’re seventy. There are so many different people doing poly who don’t talk about it on the internet.

I went to Polyday ( http://www.polyday.org.uk/ ) in London last year and there were folks there who had been poly since before I was born and raised grown up kids who had gone on to be poly themselves. Find out for yourselves, if this is what you want. 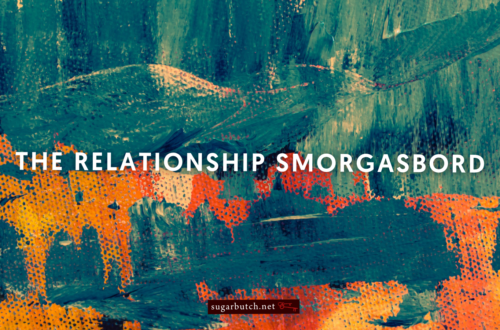