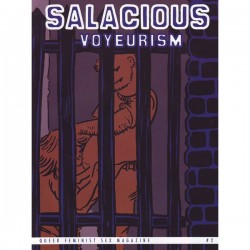 The second issue of Salacious, a queer feminist sex magazine that sports “radically sex-positive thought-provoking super-hot porn,” is just as delicious as the first issue—and then some. —that’s not true, it’s just the same size, though for some reason as soon as it came I thought it was smaller. I guess the first one was just so bountiful I thought it was bigger than it really is— the beautiful color images don’t lose their luster. I love that they have incorporated illustrations and stories into their content, and I’m sure that’s at least in part because KD Diamond, one of the folks at the helm, is a visual artist, and her illustrations are some of my favorites in the whole magazine.

Issue #3 is due out soon, but you can still get #2, which focuses on the theme of Voyeurism, online or in stores.

Salacious issue #2, Voyeurism, was sent to me from Salacious to review. Thanks!