So I’ve mentioned that the Butch Voices conferences are coming up, but I haven’t actually officially done a post and announced it to y’all! So just in case you want to take the day off (I’m looking at you, Ali), mark it on your calendars and work it out.

It’s not a butch-only conference—partners, allies, femmes, genderqueer, and non-identifying folks of all kinds are welcome to attend. Assuming that you have respect for and see value in discussing and paying attention to butch identity, of course, since that’s the focus of there conference.

Here’s the mission statement, and the description about what “butch” means, from ButchVoices.com:

The mission of BUTCH Voices is to enhance and sustain the health and well-being of self-identified Masculine of Center* people by providing activities and programs that build community and empower individuals to advocate for their whole selves inclusive of and beyond their gender identity and sexual orientation.

* Masculine of center (MOC) is a term, coined by B. Cole of the Brown Boi Project, that recognizes the breadth and depth of identity for lesbian/queer/ womyn who tilt toward the masculine side of the gender scale and includes a wide range of identities such as butch, stud, aggressive/AG, dom, macha, tomboi, trans-masculine etc.

Next up is the regional conference in New York City. It will be held Saturday, September 25th, 2010 at the Queers for Economic Justice Performance and Conference Space, at 147 West 24th Street, in New York City. On site Registration will be on the 4th floor.

The day-long BUTCH Voices NYC Regional Conference will include workshops, panels, a butch hospitality lounge as well as a very special keynote celebration of our history and community of butches.

Evening events will also include: Butch Voices NYC 2010 Queer Memoir/Sideshow Mash-Up at Bluestockings Bookstore and Cafe as well as a later Butch Voices Cabaret at a Brooklyn club.

If you’re coming from out of town, please email Kelli Dunham directly at kellidunham(at)gmail.com so we can assist you with any hospitality needs.

I’m thrilled to be helping with media for this conference. I’ve never planned a conference before, actually, so it’s good experience, and the other folks on the steering committee are so experienced and organized and hard-working, it’s been a delight so far. I’m working on putting together the conference program (or I will be, when I get back from vacation) so if you have ideas for queer and/or genderqueer organizations who might want to advertise in the program or sponsor an aspect of the conference, please do get in touch.

I recommend registering for the New York City conference as soon as possible, if you’re planning to come! We have limited space, and we expect it to be full.

After the day-long conference, we’ll adjourn to an evening of entertainment, including a very special Queer Memoir/Sideshow mashup “Butch Voices Speak” performance at 7pm at Bluestockings, and then a later Butch Cabaret in Brooklyn. More details about those as I get them!

If you run a blog or website, perhaps you’d like to put up a sidebar image to help promote the conference? Or write a post on it, telling your readers about it? Mention it on the message boards you frequent? Tweet about it? Put it on Facebook? Send an email to all the people you’ve ever met? Seriously, every little bit helps. This is happening mostly through grassroots effort and word of mouth. 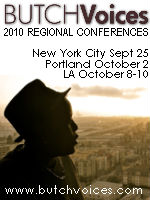 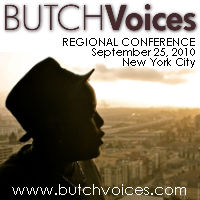 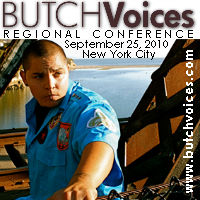 At New York City’s conference, I’ll be moderating a panel on Butches in the Media (mostly, creating our own media and self-promotion) and doing a workshop on Cock Confidence. And of course, I’ll be co-hosting the Butch Voices NYC 2010 Queer Memoir/Sideshow Mash-Up. I’ll let you know what, if anything, I’ll be doing in Portland.

So? Will I see you there, perhaps?