It’s official! I’m doing a couple different Butch Brunch dates in New York City in the two months leading up to the Butch Voices regional conference on September 25th. Want to join me? Here’s the details. 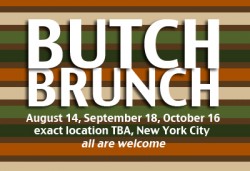 The first Butch Brunch is coming up on Saturday, August 14th, and you can RSVP on Facebook.

I organized about half a dozen some butch brunches in the past few years, mostly in Brooklyn, mostly just for friends, but we often had fantastic interesting conversations about butch identity and where we came from, and really good turnouts. I’m looking forward to chatting with folks informally, not in the context of planning the Butch Voices conference but instead just socializing, hanging out, theorizing, getting to know each other.

Who can come? Anybody! It’s intended to be a space for butch-identified folks of various identities: butches, studs, ags, anyone masculine-of-center. If folks who are not butch identified would like to attend, that’s fine too, but do realize that we’ll be talking personally about our own identities as we get to know each other. It is not necessary to be butch-identified to attend this brunch, but it is encouraged.

Butch Brunch is co-sponsored by Butch Voices NYC and Sugarbutch, so we are adapting Butch Voices opinions about what butch means. From ButchVoices.com: “We are woman-identified Butches. We are trans-masculine Studs. We are faggot-identified Aggressives. We are noun Butches, adjective Studs and pronoun-shunning Aggressives. We are she, he, hy, ze, zie and hir. We are you, and we are me. The point is, we don’t decide who is Butch, Stud or Aggressive. You get to decide for yourself.”

Anybody have suggestions? I’ll be glad to check them out. But we need to get going! Who’s in?

We’ve got a venue! We’re going to try out Cafe Orlin at 41 St. Mark’s Place in the East Village. It’s a pretty big place and they’ve got a $6 plate of eggs & potatoes & toast, and it doesn’t get cheaper than that in Manhattan. The only catch is that I can’t quite tell by their website if they serve alcohol, but I know I’ve had a glass of wine there at other times.

Please RSVP on Facebook or email me to let me know you’re coming so we can get a head count. They don’t take reservations on the weekends, so I plan on being there early to try to get our name on the waiting list for a big table. I expect about ten people so far.