I can’t resist posting this. Kelli Dunham, comic, former nun, friend of mine, and nerd extraordinaire, posed a question on her Facebook page about what genderqueer folks do when needing to pee at Penn Station: go into the woman’s room, and get yelled at? Or brave the men’s room’s grime and row of urinals?

In response, a friend of hers suggested she write a catchy song, and voila, she did. Here’s the whole explanation, and the song, in the video:

Check out more Kelli Dunham online at kellidunham.com and on Twitter at @kellidunham.

If you’d like to see her live, she’s got a show coming up with Cheryl B. (who you may know as my co-host from Sideshow), Katie McCabe, Elizabeth Whitney, and Lea Robinson, aka the Famous Lesbian Comedy Roadshow* (*famous lesbians not included) at Stonewall Inn this Tuesday, July 6th. It’s the DIRTY FILTHY RED HOT SUMMER SHOW, clearly not to be missed. 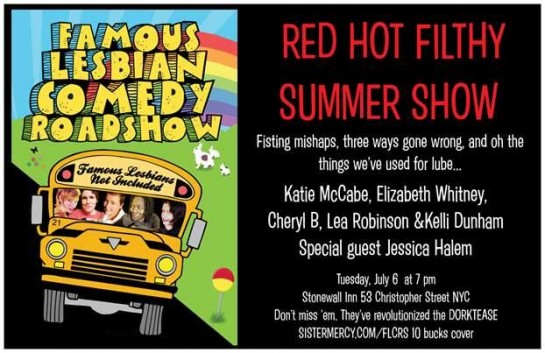