Most of the time, I exist in a pretty happy little liberal sex-positive bubble, and I don’t quite understand what the big deal is. “You’re brave,” people tell me. Yeah, sure, it takes some guts and shamelessness to put my sex life out in public, and more so to put my emotional life out in (password-protected) public, but generally, I don’t feel the wall I’m coming up against.

Sometimes, though, I feel it hard.

If you run in the same blog circles that I do, or if you follow me on Twitter, or if you’ve been following my Google Reader shared items, you probably know about the accusations made by Donna M. Hughes and Margaret Brooks against the KinkForAll conferences in general and maymay in particular. I’ve shared many of maymay’s posts, re-tweeted many of his links and comments, and have generally just been sitting here staring at my screen with my jaw dropped, feeling like a bowling ball got dropped into my stomach.

Oh. Right. Standing up for sex education, sexuality rights, and sexual freedom can be fucking scary. There’s a reason why we have to stand up for it, and work for it: because it doesn’t exist en mass, because it only exists in small pockets, and because there is an entire system out there trying to keep it shame-based and repressed.

It’s not like this is the first time I’ve had this revelation. It keeps happening, over and over, yet somehow it surprises me every time.

This past March, for example, I attended KinkForAll Providence in Rhode Island at Brown University, and I heard the entire story of how Megan Andelloux’s Center for Sexual Pleasure and Health was barred from opening and kept in bureaucratic red tape for nearly a year. Megan told the entire story of how she fought and what happened, and how she finally did open the Center (which is beautiful and so much fun, by the way, I highly highly encourage you to stop by if you’re ever in the area), which again gave me that bowling-ball-in-my-stomach feeling.

I won’t recount the story here, I couldn’t tell it like she can anyway. Go watch the video, it’s worth it, seriously.

I’m so glad she opened the Center. I’m thrilled to hear the stories of how it’s working, who she’s been helping, how she’s been an open and honest resource for sexuality education. It made me so nervous to hear her story, to witness the amount of power someone in opposition of sexuality education could possibly wield, and to see, yet again, that it is a radical thing to promote happy, healthy sexuality.

God, that just makes me so angry.

I have no idea what an adequate response on my part could be. I feel a little paralyzed, to be honest. I know I should feel the fear and do it anyway but I can’t help but thinking, I was at KinkForAll Providence. In fact, I just had a workshop at Brown University last week! I could be targeted, too. And that is fucking frightening. 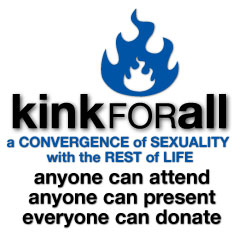 Maymay has been writing amazingly beautiful, transparent posts about this topic, and I highly encourage you to read them if you haven’t already. Or re-read them, if you have. I am incredibly inspired by his transparency, and his ability to summarize something clearly and consistently. Did you see the ways he broke down Donna M. Hughes and Margaret Brooks’ concerns over the KinkForAll unconferences?

He’s been encouraging everyone to stand against stigma and others, like Essin’ Em, have written lovely pieces in response. I’ve had a piece of my own brewing for weeks now, but sometimes I can’t quite get past the fear involved in putting Donna M. Hughes and Margaret Brooks’ names on my own site—it seems like an invitation to be on their hit list, doesn’t it? What if they come after me next?

I’m trying to be honest there, but I know it sounds pretty selfish. And to take it one step farther, to attack Megan and maymay—and Aida, who chairs The Sexuality Health Education and Empowerment Council (SHEEC) at Brown and is doing fantastic work up there!—and our beautiful, important community of educators and healers, is to attack me. I have already been attacked. Is there more they could do? Probably. Is that scary? Absolutely.

But will I let it stop me? No.

I guess my point is just, this work is hard. There are real consequences, in this conservative culture that can incite sex panic at any given moment, and what used to be a happy little PG project suddenly is misconstrued as the equivalent of child pornography and abuse. I want this work to be safer. I want it to be totally acceptable for sexuality educators to open a center, or for educators to host and (un)organize conferences around sexuality and the intersection with the rest of life. I want everyone to know how their bodies and parts and pleasure works. I want us all to have access to the kind of information we are curious to know about. Seems like a pie-in-the-sky dream sometimes, but instances like these attacks and accusations solidify my goals and purposes all the more. It continues to prove that we need this, this culture needs this, these people need this, and it can be transformative in beautiful, blossoming ways.

Fast forward to this week, and I now hear that Aida has invited Donna M. Hughes and Margaret Brooks to come to a panel at Brown University on Sex Panic! When Educators Are Censors. Here’s the information about the panel below. If you’re anywhere near Rhode Island, I highly encourage the travel, it’s going to be worth it. (I really want to be there, I’m trying to move some things around, I already have an obligation that day.)

Sex Panic!: When Educators Are Censors
a panel and Q&A session moderated by Brown Professor of History and Brazilian Studies Jim N. Green, author of Beyond Carnival: Male Homosexuality in Twentieth-Century Brazil

What would you do if your organization were criticized for following through with its mission statement? What if you were publicly denigrated, misrepresented, and harassed for your work? What if educators themselves were trying to hamper your attempts at education? Finally, who should have a say in a college student’s sex education?

Read Aida’s direct letter to Donna M. Hughes and Margaret Brooks, inviting them to the panel, and take a look at maymay’s mention of the upcoming panel, too.

I feel like this is so important. I don’t really know what my own path of sexuality education or sex writing looks like, I don’t know where this Sugarbutch job will take me, but I do plan to keep doing it. When panic like this comes up, when accusations and attacks are made, I want to be part of a community that can rally around each other, stand strong, and fight back if necessary. I want to be a part of that protection, to continue to protect my own work and the important work of those around me.

Because I know just how badly we need this work, and this is just further sign of how much work there is, still, to do. 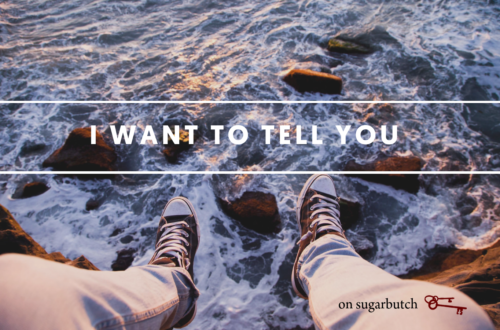