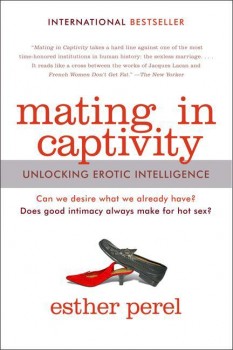 Though the cover looks all mainstream self-help-y, it isn’t. Perel is a seasoned therapist and it is mostly full of psychological examples of her clients’ complications in keeping their long-term relationship strong while still having their sexual needs met.

One of the world’s most respected voices on erotic intelligence, Esther Perel offers a bold, provocative new take on intimacy and sex. Mating in Captivity invites us to explore the paradoxical union of domesticity and sexual desire, and explains what it takes to bring lust home. Drawing on more than twenty years of experience as a couples therapist, Perel examines the complexities of sustaining desire. Through case studies and lively discussion, Perel demonstrates how more exciting, playful, and even poetic sex is possible in long-term relationships. Wise, witty, and as revelatory as it is straightforward, Mating in Captivity is a sensational book that will transform the way you live and love.

Perel quotes many authors I’ve read (and liked), has a very open minded view about kink and fantasy, and grew up largely outside of the US, which gives her a perspective on our achievement-oriented culture that I appreciate. She does include some gay and lesbian couples in her examples, and her examples and suggestions aren’t heteronormative.

The Amazon description reads: “Some of the proposals Perel recommends for rekindling eroticism involve cultivating separateness (e.g., autonomy) in a relationship rather than closeness (entrapment); exploring dynamics of power and control (i.e., submission, spanking); and learning to surrender to a “sexual ruthlessness” that liberates us from shame and guilt.” YES. Isn’t that precisely what I advocate here on Sugarbutch, in fact? Especially within lesbian cultures, the codependency that comes with the “merging” is so normal it’s practically expected, and I feel like we constantly have to fight against it to avoid it. Somewhere Perel has a line about keeping the spark going, how in order to have the spark you have to have friction, and in order to have friction you have to have a gap between you. That is autonomy, right there, and if one or both of the folks in the relationship don’t have enough of it, the spark won’t be cultivated. Obviously I explore a lot of the dynamics of power and control, and I write about why that stuff can be fun and liberating instead of reproducing some sort of dangerous power dynamic. And shame and guilt? I wish it was possible to just wave a magic wand and take away the shame and guilt about sex from this culture—wanting sex, wanting kinky sex, wanting more sex, our carnal desires in general.

To quote Tara Hardy: “This is the sweet glory reason for a body in the first place.”

I really believe that. Now, if only I can find a way to help teach the undoing of that shame and guilt. (I know, I know, that’s lofty. But hey, why not aim high?)

Perel has some great concepts around the conflicts between the dichotomy of love vs lust, stability vs passion, security vs adventures, occasionally misunderstood as a mutually exclusive binary, but, she argues, is really a “paradox to be managed” instead of a “problem to solve.”

It is a puzzle. Can you hold the awareness of each polarity? You need each at different times, but you can’t have both at the same time. Can you accept that? It’s not an either-or situation, but one where you get the benefits of each and also recognize the limits o each. It’s an ebb and flow. Love and desire are two rhythmic yet clashing forces that are always in a state of flux and always looking for the balance point. —p84

I’m not sure if “you can’t have both at the same time,” I think you can love someone and still feel passionate. But you can’t necessarily have security and adventure at the same time … though what if you’re on a backpacking trip with your sweetheart? You’re having an adventure, but you’re with your lover, so you feel the stability that that relationship can cultivate. And sometimes when I’m having kinky sex and talking all kinds of dirty with Kristen, what’s streaming through the back of my mind is I love you I love you I love you …

Still, I get the point. And I really appreciate Perel’s encouragement of treating sex like a hobby, like something you pursue, like grown-up play—that’s what it is. 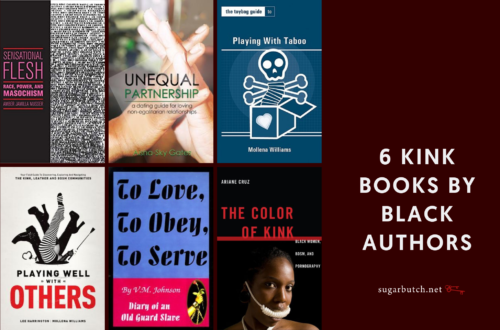