In much of the workshops and trainings around sexuality and sexual expression that I have attended, we have often started with one basic concept: saying no.

For example, I have been part of a circle of pairs where the instruction was for the person on the outside of the circle to think of a place on their body that would really like to be massaged right now. Hands, feet, wrists, scalp, shoulders – wherever there might be some great tension released. And the instruction was to ask the person on the inside circle, politely, “would you please massage my ____.” The person on the inside was instructed to say “No.” They could say, “I’m sorry, not right now.” Or, “I really can’t, no.” Or to couch it in some other softer “no,” but the instruction was specifically to practice saying it – even if they actually wanted to give the massage! (There would be time for that, later.)

The point of that exercise is to practice saying no. To know that it’s okay to say no. To have permission to say no – to have instruction, even, to say no. It’s actually really hard! But it’s so, so important, especially when building trust, especially when deepening a relationship, especially when working to assert your own needs and desires, as I feel probably all of us struggle with, in some ways.

Without the ability to say no, the yes is virtually meaningless. Without the reassurance of my partner or girlfriend or lover or wife or toy or submissive saying no to me every once in a while, how can I be sure that she really can say no? It feels good, to me, to hear someone create limits on something, because then I have a better idea of how far I can go. I hate to discover dealbreakers in the middle of something, that is not good.

This happens in relationships, too, not just with sex. For example, my friend and her girlfriend were planning to do something, one of those big relationship things. The details are a bit unimportant, but it’s something her girlfriend had expressed skepticism about in the past, and my friend was really into it. At the last minute, her girlfriend decided no, actually, it isn’t something she wanted to do. Oops sorry! My friend was mad, for a while. We talked and talked and she was upset. After the dust cleared a little, though, my friend said she was really grateful to her girlfriend for being honest. She was really grateful that her girlfriend wouldn’t be the kind of person who would just go along with something her partner wanted, even if it wasn’t something that she truly wanted herself. How much worse would the resentment build up if she had gone and done it anyway, secretly knowing she didn’t want to! How much more tension and stress would their relationship be under! My friend’s girlfriend risked hurting my friend’s feelings, and risked the consequences of being honest, but also has a lot of trust and faith that they will be able to talk through things, to reach some sort of mutually appreciated conclusion. And my friend has said, many times, since, I value honesty over consistency any day.

Audacia Ray has said that working in the sex industry taught her to say no. She’s also said, “‘No’ is a complete sentence!” (especially when she and I have talked about how overcommitted we are), which I find myself saying to myself in my head frequently. Lots of the productivity blogs talk about turning things down as a way to really take control over your own time and owning your own sovereignty. This is important in sex play and relationships, too.

I know lots of these concepts around “saying no” are taught in sexual assault, survivor, reclaiming sexuality, and power play workshops all over, but I want to reiterate where it comes from, because the next part is this: about saying yes.

As I have been writing about a bit lately, I have struggled with being a top and dominant in bed. Sometimes, upon expressing to my lover something that I’ve wanted to do, and after they say, excitedly, that they have always wanted to do that too, I still have trouble, I still doubt that it’s okay, I still hesitated.

It’s like what J. said, in a comment on the Reconciling the Identities of Butch Top and Feminist essay:

Recently, my partner and I have been experimenting with some new things in bed and I was constantly asking her if she was okay with what we were doing. I was so worried that I asked her several times in a row, not taking her first yes for what it was. She told me that if I’m going to trust when she says no, I also have to trust when she says yes.

Bingo. I love that explanation of this process – so succinct. Yes, exactly.

As the dominant, I think I can ask whether my submissive is okay with what we are doing (or going to do), even more than once, until I am satisfactorily convinced of her consent, but – BUT! – it is also my job to trust her answer, to believe her, and to let that be enough.

If she consents, and uses it against me later, that is, most likely, NOT MY FAULT and she is a jerk. (See Dan Savage’s Savage Lovecast Episode #165 where a guy gives his boyfriend permission to fuck other guys, then gets completely pissed and refuses to see him again after he does. Not okay!)

If I have chosen to date this girl, then personally I do have some sort of assumption that her consent means that she knows herself, and she is able to gauge her own reactions, and has enough self-knowledge that she will know whether being in whatever situation we’re discussing will make her freak out or not.

I can, of course, check in with her during the scene (hopefully in ways that do not break the scene entirely – see The Topping Book and The Bottoming Book for more about that), but I also have to accept that if something was wrong she would tell me or communicate it to me somehow, and that it is not my job to be a mind reader. It is my job to ask when I notice something, it is her job to communicate with me actively.

This stuff is really damn hard, I know. Sometimes I don’t even know what I want, let alone being able to articulate it. But if we can’t trust each other to say yes, and no, and mean it, then we can’t go farther, we can’t play with consent and force, we can’t establish deeper trust to be able to get to the darker, juicy stuff, like domination and submission outside the bedroom, and role play, and deep, late night conversations untangling some of our control issues. Ideally, a good relationship works to bring parts of you to light that weren’t quite visible before, and supports you as you work through them, and possibly enhance or change them – and I have found no better tool for that than the many varied practices of BDSM. 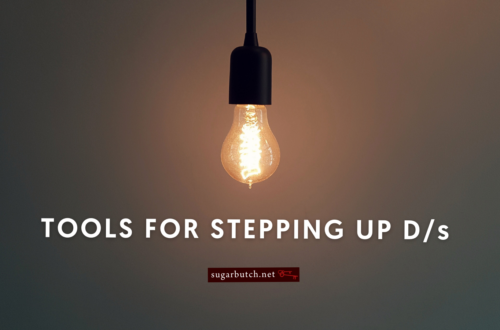 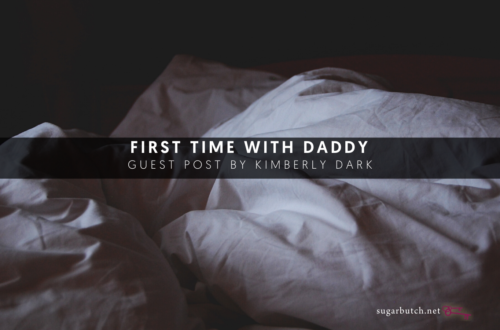 First Time With Daddy, Guest Post by Kimberly Dark (Excerpt from The Daddies)
May 29, 2020