October is my favorite month – I’m going to state it officially for the record. It’s got some significant gay activist dates, like October 11th (in the US – apparently it’s the 12th in the UK), which is National Coming Out Day, and the whole thing is LGBT History Month. And October 12th is the anniversary of Matthew Shepard‘s death.

And this year, I’m sure you’ve heard, was the National Equality March on Washington, and news about its success has been streaming through my reader all day.

Last year, on National Coming Out Day, I wrote about where I was when Matthew died (in the same city as he was, actually) and shared the poem I wrote about it years later.

I still think coming out is one of the very most important things we can do, as queers, as dykes, as butches and femmes, as andro genderqueer gendernonconforming gender rebels, as trans folks, as kinksters. Coming out claims the space we rightfully stand on, and says we accept who we are, and if you don’t, that’s your goddamn problem. Coming out is visibility, and completely overrides whatever the lesbian uniform currently is.

Whoever you are, I urge you to come out to just one more person this week, this month, this year. Come out as whatever particular identity you happen to be. Come out in support of gay rights, come out by calling your coworker on their homophobic jokes. Come out and claim your space.

I ran across this clip of Judy Shepard visiting The Ellen Show last week, on October 9, 2009. She talks about Matthew’s death, her own subsequent activism, what a hate crime is, and the amazing news of the US House of Representatives expanding the Hate Crime definition on October 8th (I know, I don’t usually report on current events, but this is important and relevant to the October Activism).

PS, check out Ellen’s short hair! It just keeps getting shorter! I would love to talk to her someday about her gender and how it’s evolving – has she always been butch, and now that she has some solid fame and notariety she finally feels comfortable expressing herself? Is it Portia’s influence? Is she a reflection of the current culture? (Seems like she always has had very timely hair.) I’m curious, I’d love to hear what she says about it. And I just love that she’s doing more gay activism through her show than she ever has. 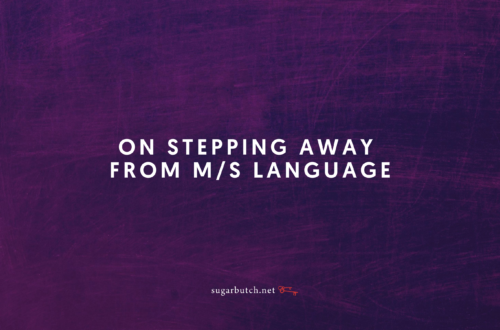