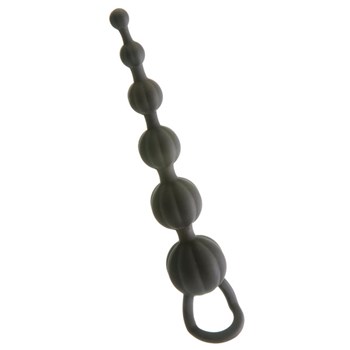 And I have this faggot boy on my hands these days, so I figured I may as well go for it.

So these beads might need some extra cleaning time.

Luckily, the silky-smooth silicone is awesome, and it’s really easy to do a quick wash with soap and water, and then toss ’em in your cock soup next time you’re sanitizing toys in boiling water. Easy peasy, no big deal. 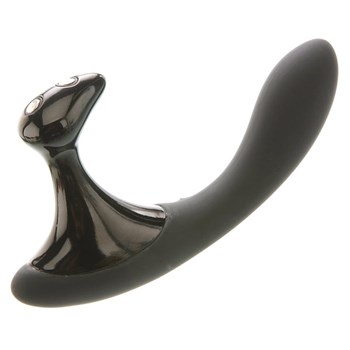 also sent us this L’arque prostate massager. I mostly picked it up because it’s the exact same toy as the L’arque gspot massager, it’s just in black instead. I like this kind of silky-smooth silicone (how many times have I mentioned that already?), and lately I have really liked having something for g-spot while getting off solo. Unfortunately, the angle of this toy is all wrong. The internal part isn’t bad, but the vibration on the upper curved arm part doesn’t hit my clit at all. Maybe another person’s body would fit this better, but it’s a pretty specific angle and it’s hard to have the things touching that I want touching.

Still, it’s a pretty toy, and works well. I like the vibration options (pulse and heavier pulse and erratic pulse and all that), and I like the feel. It’ll hang out on the nightstand for a while.

for rife and I to review, but I have complete editorial control over what I say about ’em. This is just for full disclosure. 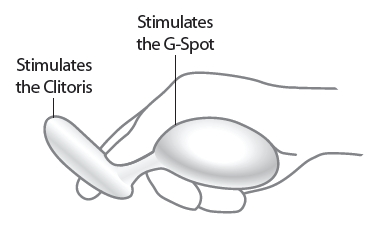 Maybe it’s silly, and it’s probably 99% an issue of marketing and what the majority of the population knows, but every time I see a product that advertises that it’s “for the g-spot,” I think, “Really? Do we really have to have this magic “spot” on bodies that is named after a male doctor who “discovered” it?”

I resent that women’s bodies have been claimed.

The “g-spot” is a word and concept that symbolizes the “discovery” of and ownership over parts of women’s bodies, and it is a big ol’ pet peeve of mine.

Of course, there’s constant debate in the scientific health communities about whether the “g-spot” really exists at all—just like how there’s sometimes “official” debate about whether or not someone with a g-spot can ejaculate. Um hello? That just seems … ignorant. Based solely on my completely unofficial poll of my however-many lovers in the last fifteen years, ejaculation can happen and clearly there is some sort of area in the g-spot region that, for some people, when stimulated, is quite pleasurable and can result in either ejaculation or orgasm or both. Of course, for others, there is no pleasure (or sometimes discomfort or pain).

What does that tell me? Well, that our bodies are different.

The New View of a Woman’s Body calls that area the “urethral sponge” and I like that better, though it’s way less of a sexy phrase. Dentifrice vs toothpaste. It’s argued that the g-spot exists somewhere within the urethral sponge, so I suppose they are somewhat different things.

Anatomy is not my specialty, though I am fascinated by our genital parts and what they do. Even more than that, perhaps, I am fascinated by the social and political decisions made surrounding bodies, particularly marginalized bodies (people of color, trans and intersex and “other” genders, women).

So now that you’re Public Service Announcement about my annoyance about the concept of the g-spot is out of the way, let’s move on: This is a review of the Aneros Evi, a somewhat new (as it came out in 2013) g-spot massager toy.

The Aneros company is best known for its neat-shaped prostate toys, which I, not having a prostate, have often admired, though not had much excitement when trying. It seems not all that different than a butt plug, to my non-prostate-having butt. Still, the products are well designed, and that is always a turn-on for me.

So when the Evi was released, which is specifically for g-spot stimulation, I was eager to try it. I like toys that stimulate the g-spot, generally, and lately more and more I have wanted something inside, in that spot, while I’m getting off.

And as a bonus, Evi’s little foot (or, the engine of the starship Enterprise, if you are thinking what I’m thinking) is supposed to give the wearer some added clitoral stimulation too.

The stimulation is supposed to happen purely when squeezing. The kegel exercises (hey look! Here’s another man, Arthur Kegel, who has named a (genital) place on my body after himself) combined with this toy is supposed to simply be enough for this toy to massage my g-spot.

Well … it doesn’t suck. I don’t kick Evi out of bed. But it’s not any sort of mind-blowing stimulation. I think for my particular body, the Evi isn’t quite the right shape. It’s too small, the foot is not long enough to reach my clit, it doesn’t stimulate my g-spot/urethral sponge enough, or the way I’d like it to.

Still, it’s a great toy to have at arm’s reach in my arsenal. I bet it’s going to be great for a little extra added front hole stimulation while doing some ass fucking. I hear it’s a pretty decent butt plug, and I suspect it’d also be comfortable to wear out in public. So I still have some ideas about and things to experiment with my new Evi friend.

Aneros Evi was sent to me by Good Vibrations to review, but this review consists completely of my own opinions and ideas and is not influenced by anyone else (except maybe rife). Pick up your own Evi at goodvibes.com, & see more of my very favorite recommended sex toys at Good Vibrations here.

One of my favorite sex toy stores ever sent me the Pfun Plug by Njoy a few months ago. Literally, months ago. I think it was July.

So that right there should probably tell you a bit about what I think of this toy – I review toys sometimes that aren’t even on my review list because I get so excited about them! But this one was hard for me to get into. At first I thought they were sending me the Pure Plug, which I was totally excited about, but when I ended up with the Pfun plug I was skeptical. It’s made specifically for prostates, after all, a bit of anatomy that I don’t have.

So, it sat in its beautiful satin-lined box for a little longer than I’d care to admit.

And finally I was chatting with Tess one day, before this whole calendar nonsense started, partially because I know she’s a big fan of Njoy. Big fan. This Pfun plug is my first Njoy toy, so hey, don’t get me wrong, I was really excited to receive it.

I say to Tess: I’m not sure, it’s such a boy toy …
Tess says: Just fucking try it. I thought so too, but it’s actually super great.

And oh my is it. Maybe it’s the weight, which is what differentiates it from the other … many … butt toys I have, but it’s really quite different. The head is not too fat and goes in pretty darn easily, with this great warmth because of the weight of it. And the smaller ribbed part of it is just pronounced enough to give it a lot of texture when going in and out.

It’s pretty good as a sort of ben-wa balls for g-spot stimulation too – obviously it’s not really long enough to get too far inside, and for you size queens out there (you know who you are) it’s not going to be enough, but generally the Pfun Plug has got a great angle for hitting the g-spot just right.

Okay, some logistics: this buttplug is 3-1/2” x 1-1/4″, which makes it a bit longer than average, but an excellent width that is not too much but not too little. It weighs 10.6 ounces, which is, uh, heavy. Very heavy. It’s made of stainless steel.

This lovely little toy makes me want to try out the Eleven. So. Much.