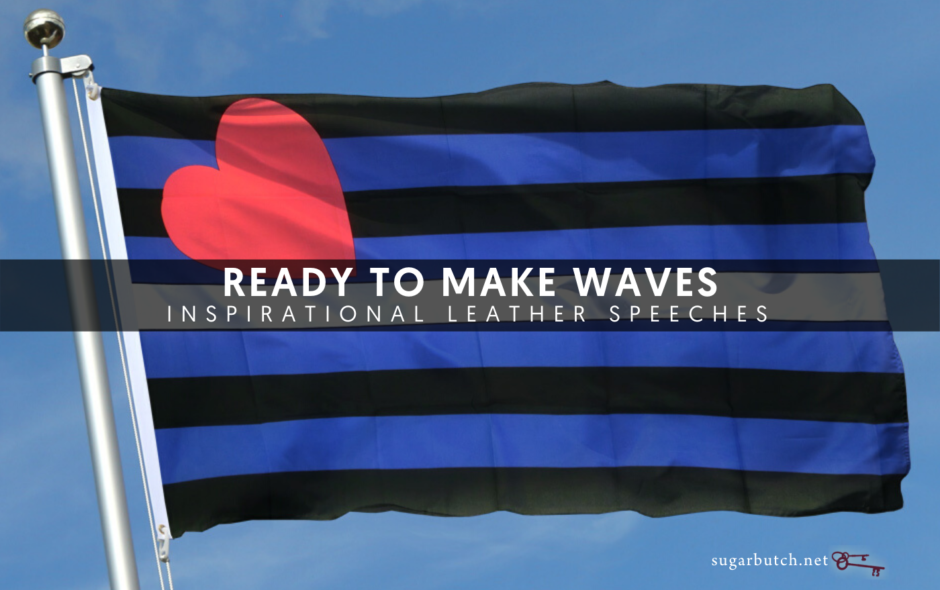 I’ve heard more speeches in the leather community lately than I have ever in my life, and I gotta say — I’m moved. There is some beautiful oratory happening, some strong inspiration, some insight and sharing and vulnerability and power that I haven’t seen in a long time.

It’s how I used to feel, in feminist and queer activist circles. At all those rallies and meetings and events. But I haven’t felt that way about queer and feminist events in a while. Leather feels more at home, and more edgy, and like more relevant topics.

Here are two examples from this past year: Bianca Spencer, current Ms Rubber San Francisco, at the Ms Powerhouse Leather San Francisco contest, and Jack Thompson, at International Mr Leather in May of last year, delivering what became his winning speech.

Bianca, the current Ms Rubber San Francisco, gave this speech during the Ms Powerhouse Leather San Francisco contest — and I was moved. I mean, I think we all were. I haven’t been so inspired by a speech in a long time. Thank you, Bianca!

Congratulations Missy Boots on winning the title you have earned many times for over the past 14 years.

Thank you to Pedal Pups for letting The UnRuly Social Club take over their regular bar night for this amazing evening.

“Just for clarification purposes, I don’t care what gender the hospital assigned to you and then told your mama as they handed you off. But when I say women I mean ALL women. If you don’t know what that means, google. “

“We are blessed enough to live in a fetish rich area. Walking down the streets it’s not uncommon to see Corcoran’s or Wesco’s and a bar vest strolling down the Castro next to the tech bros in hoodies and rest of their awful fashion choices. But the moment I saw the leather pride flag displayed next to the bear flag at the Strut, it solidified my need to live here. 18 months later, I crossed the California border and haven’t looked back since. I was lucky, I had the access to pick up and live a whole new life. But not everyone is as lucky or has the same ability to find a home like ours. In most places I might be one of the only women nevermind the only black girl around.

In setting up the victory party, I was able to easily contact 4 separate groups predominately run by women to do the official after party. In less than 24hrs, we had 4 “yes’s” and official logos to boot. I didn’t need a directory or heavy online research to find them. Didn’t even need the search the dreaded dark pages of Fetlife. I just sent them a message on Facebook. But I also understand it wasn’t because of luck that I was able to find them. I wish it was that easy. The local women’s community is an example of hard work, dedication and nerve. They refused to give up. They joined leadership positions. They played the community politics. They took over corners of the bars with the best resting bitch face they could muster. And if it was a good night, they might have gone home bruised and bloody with a smile on their face instead of being chased out of whatever bar or party they tried to attend.

The Bay Area is home to some pretty big names, but its also filled with a plethora with unsung heroes who just came early to set up events, sold raffle tickets, showed up every weekend determined to get that bootblack shift, or even the femme with her crinoline and swing skirt who refused to give up and stood at that bar until someone served her. Non-male identifying Bootblacks elbowing to make space in the back of the bars because who was going to tell them they couldn’t. For every woman, non-binary person, trans person you know making space, there’s 5 more behind them who gave up the fight and went home because they are too tired and this must not be the space for them. And I’m not even going to begin to intersect race into this conversation….

As exhausted as we are, we still are fighting for visibility. Fighting for space. Today we get a lone rack of gendered clothing at one our most popular local leather stores and maybe one day I’ll see our bodies, complete with surgery scars, cellulite, body hair on a poster for a party or an major event without asking to be visible in the community we helped create. But even with all of the bullshit, we are still luckier than most. Most of the country is searching online looking for something someone anyone or anything that fits into what they feel in their heart or the deviant thoughts in their mind. We happen to live in an area where the groups of nonbinary folks, trans folks and women before us (and still us) hear the word no and think “oh honey. No isn’t a safe word”.

For the majority of the kinky/fetish nonbinary, trans folks and women there are bars we don’t feel safe walking into, if we are even welcome to walk through the front door. Which we usually aren’t. We have to think about safety in a way cis man don’t. Thank you but the bathroom is NOT the only place where we need to feel safe.

We have to continually prove ourselves just to receive basic levels respect. (How many times do I need to give you my resume?) We are told to give up our precious time with family or fuck buddies to join a board , be on a committee, or we just do the damn work ourselves because my apparently voice isn’t important enough to listen to unless I dedicate how many volunteer hours?

There have been many discussions over women and non-binary bar titles. I have been asked about my experiences in and outside our little local leather bubble usually by gay cis men. After I tell them what happened the other day in a bar, online or while visiting a proprietor that I literally want to give my money to or where I might be one of the handful of women present. Typically I hear “I had no idea… I thought we fixed this…. I am so sorry but is it really the space for you?”. Yes. Yes it is. So I have decided that our marginalized communities don’t need to talk more, you need to listen better. As my first grade teacher Mrs. Costa instilled “use your listening ears” which easily translates to zip your lip and open your heart.

To quote a long forgotten white man: “don’t forget that Ginger Rogers did everything Fred Astaire did…backwards and in high heels.’ While those gender norms are antiquated, it showcases the amount of times we have bent over backwards and danced the danced. And for what? In the year of our Queen, in ‪Beyoncé‬’s 2019 , while hearing ‪Lizzo‬ blasting from every apartment and bar with a rainbow flag attached, I sometimes still can’t get served without a man ordering my drink for me. But you happily tell me to sashay and slay.

So one of the questions I would like to ask those running these contests “is this space safe for the person running for this title”? Do I see them as an ambassador to the community or as a box we checked off? Can they be here without me and feel welcomed? What about those without a winning patch on their back or a title to their name, Is their space for them here?”

I implore the first Ms. Powerhouse to not only make space for themselves but pave the way for others who will never grace this stage. Whose name isn’t regularly popping up on someone’s Facebook feed. Who hasn’t found community yet, but is getting ready to step foot into their first leather bar and is absolutely fucking terrified.

I hope you piss people off. I hope you stand firm in your beliefs. You might become tired and frustrated. But we are here with you. I will stand behind you when you start to stumble. Because while this might be “just another bar title” to some. I know you are much more than that. You have already made history. You are already courageous. You will speak in places that some of us will never get the opportunity to grace. Use your voice. Make it loud. Make it clear. and when you need to be louder, ask me for mine. As Malala Yousafzai once said “I raise up my voice—not so that I can shout, but so that those without a voice can be heard. … We cannot all succeed when half of us are held back.” Collectively we have been impatiently waiting to meet you and will do everything in our power to support you. “Individually we are one drop, together we are an ocean.”

I haven’t found the transcript for Jack’s speech yet, though I think I saw one at some point so I do think it’s out there somewhere. Jack is breaking down boundaries as an out, bi-racial, bisexual, HIV-positive trans man, and there has been some push back from the cis men in leather, but equally powerful support. It seems clear to me why he won, when I heard this. #JackIsMyIML